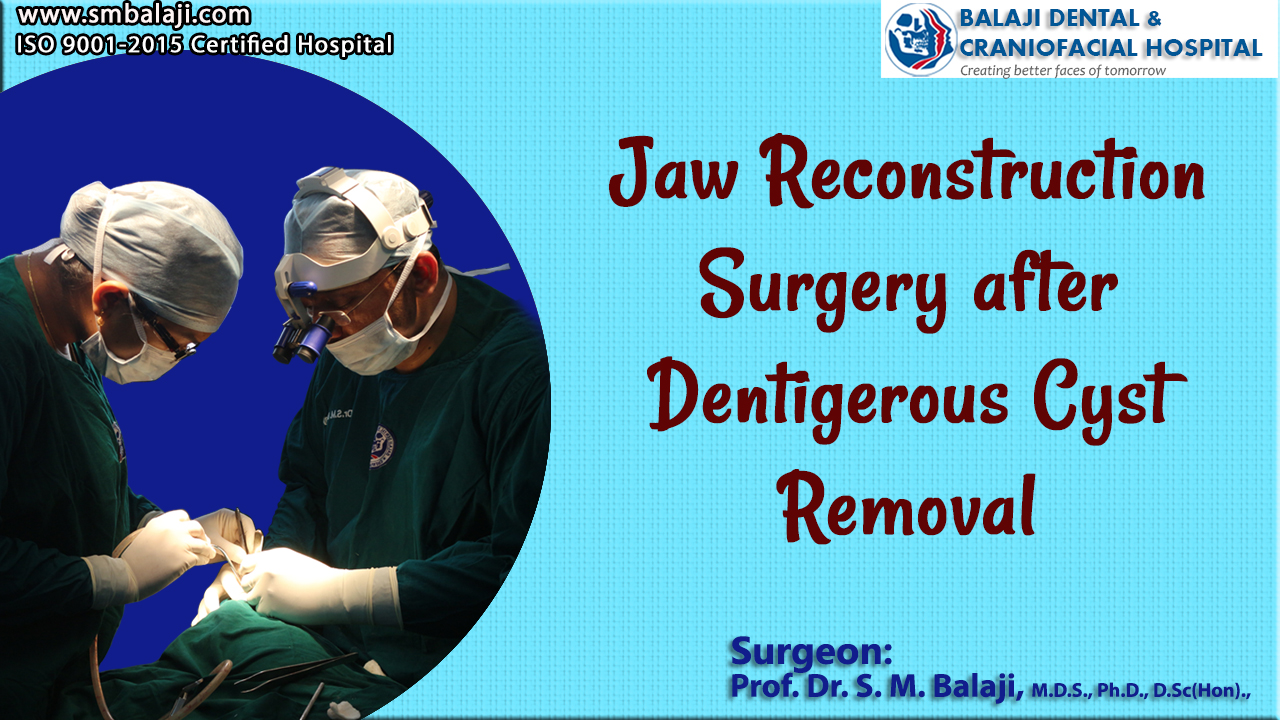 The patient is a 41-year-old male from Chikkaballapur in Karnataka, India. He noticed the development of a swelling in his right lower jaw around 9-10 months ago. Thinking it would subside on its own, he had ignored it for a couple of months. It was the development of pain, which made him approach a dentist for consultation.

This had progressively increased in size along with development of pain and loosening of teeth. Chewing and eating became progressively difficult because of the swelling. Alarmed at this, he had presented to a local oral surgeon for diagnosis and management. Radiographs had been obtained revealing the presence of a dentigerous cyst in the region.

Seeing the complicated presentation of the cyst, the surgeon referred the patient to our hospital for management. Our hospital is a renowned center for dentigerous cyst surgery in India. We are also a premier center for mandibular reconstruction in India.

Next most commonly involved teeth are the maxillary canines. They are also rarely found involving deciduous teeth and occasionally odontomas. Orthodontic treatment is employed to bring the canines into the arch if there is no pathology present in relation to the impacted tooth.

Diagnosis is through radiographic imaging of the affected region. Dentigerous cysts are classified according to their radiological position, namely central type, lateral type and circumferential type. A dentigerous cyst is often treated by excision of the cyst along with the extraction of the associated tooth.

Dr SM Balaji, jaw reconstruction surgeon, examined the patient and ordered comprehensive imaging studies including a 3D CT scan. The patient had a swelling in relation to right lower molar region. Imaging studies revealed the presence of a cystic lesion extending from the first molar up to the ramus of the mandible. This confirmed the diagnosis of dentigerous cyst.

It was explained that the cyst needed to be enucleated completely. Associated teeth would also be extracted to ensure that the cyst did not recur. This would be followed by jaw reconstruction surgery. The residual bony defect would then be reconstructed using a costochondral graft harvested from the patient.

Final step of rehabilitation of the patient would involve dental implants. This would enable the patient to regain full masticatory function of his jaws. Abutment is attached to the implant. Artificial teeth are then attached to the implants to facilitate this. Implants mimic tooth roots. Good gum tissue health is necessary for success of implants. Single implants can be placed under local anesthesia.

Under general anesthesia, a right inframammary incision was first made. This was followed by dissection down to the ribs following which a costochondral rib graft was harvested. A Valsalva maneuver was then performed to ensure that there was no perforation into the thoracic cavity. The incision was then closed in layers with sutures.

Following this, a crevicular incision was made in the mandible and a mucoperiosteal flap was elevated. The right lower first and second molars were then extracted as they contacted the cystic cavity. A transalveolar extraction of the impacted third molar was then performed followed by total cyst enucleation.

This was followed by electrocauterisation of the cystic cavity along with antibiotic flushing. The resultant bony defect was packed with rib graft. Hemostasis was check followed by closure of the incision with sutures. There was satisfactory control of postoperative bleeding at the surgical site.

The patient expressed complete satisfaction at the surgical results. There was no external scar as all incisions were intraoral. It was explained that dental implant surgery done after consolidation of bone would result in total rehabilitation.