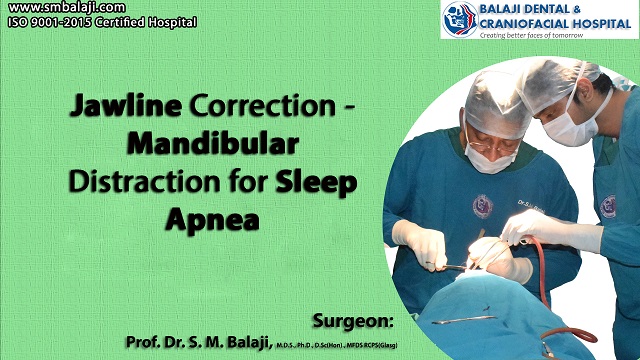 Patient with long standing dissatisfaction over the structure of his face

The patient is a 25-year-old male from Haridwar in Uttarakhand, India. He states that he had always had a small lower half of face. Both his maxilla and his mandible were extremely retruded. The patient had always disliked his facial structure because of this. He stated that he has no history of childhood trauma or any other issues that could have caused it.

His maxillary and mandibular retrusion were not only esthetically compromising, but also compromised function. He had been troubled with breathing problems since he was a little boy. His sleep had been disturbed and he would often wake up gasping for air. He had always had daytime somnolence and this had caused a lot of trouble with his teachers in school.

These problems had persisted all through his life. It was only about two years ago that a colleague had suggested that this could be corrected through surgery. The patient and his parents immediately fixed an appointment with a facial cosmetic surgeon in a nearby city.

A sleep study had been obtained with the diagnosis of obstructive sleep apnea. They had been advised that he needed jaw advancement surgery. The patient and his parents had consented to the proposed treatment plan. Subsequently, the patient had undergone bijaw surgery with advancement of both his maxilla and mandible.

The patient had been sorely disappointed with the results of the surgery. He still felt that the lower third of his face was disproportionately small compared to the rest of his face. His sleep apnea problems had also not been resolved. He still woke up tired from a full night’s sleep.

Determined to get relief from the problems that had troubled him all his life, he started making enquiries regarding corrective surgery. It was at this point that he met an old friend who had got full relief from similar problems. This friend who had been plagued by sleep issues had been operated in our hospital.

Referred by his friend, the patient immediately got in touch with our hospital manager. He was asked to send his imaging studies following which an appointment was fixed for him to come for consultation.

Patient presents with comprehensive records at our hospital

Dr SM Balaji, jawline correction specialist, examined the patient and ordered imaging studies including a 3D CT scan. This revealed that the patient had very short bilateral rami. It was explained to the patient that he had reduced airway space because of this. This was causing his tongue to fall back into the throat, causing the nighttime awakening.

A sleep study was performed, which revealed very poor oxygen saturation levels. This revealed that the previous surgery had done little to relieve the patient’s obstructive sleep apnea.

Treatment planning was then explained to the patient in detail. Bilateral mandibular distraction osteogenesis would be performed for the patient. This would result in lengthening of the bilateral rami. Lower facial height would also be increased thus improving esthetics.

Under general anesthesia, bilateral mandibular vestibular incisions were made with dissection down to the ramus. Old plates were then unscrewed and removed from the body of the mandible. Bone cuts were made to the ramus followed by fixation of the internal mandibular distractors. Distraction function was checked and found to be optimal. Incisions were then closed with sutures.

A maxillary vestibular incision was then made followed by removal of all the plates fixed at the previous surgery. The maxilla was then disjointed followed by intermaxillary fixation. This would ensure that the patient had perfect occlusion.

There was dramatic improvement in the quality of the patient’s sleep after completion of the distraction. He also expressed his happiness with his facial esthetics. It was explained to the patient that the distractors will remain in place for a period of four months. This would allow for consolidation of new bone formed at the site of distraction.

The patient was instructed to return after four months for distractor removal surgery. He expressed understanding of the instructions and expressed his satisfaction at the results of the surgery.