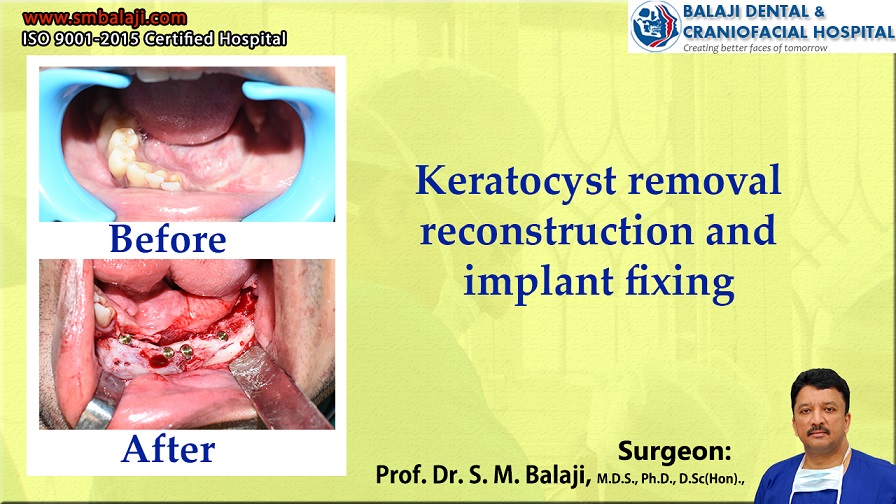 Odontogenic keratocysts are benign developmental cysts, which cause extensive destruction of bone. The most commonly arise from the epithelial cell rests of the dental lamina. The most common affection region is the posterior region of the lower jaw. The presentation can be unilocular or multilocular in appearance.

These lesions have a preponderance for males and are most common in the 40-60 age group. Males are affected at a ratio of 2:1 when compared to females. They very rarely occur in the maxillary bone. There is localized pain and swelling at the site through the incidental radiographic diagnosis is common for this cyst. Gum tissue appearance is normal.

Treatment is through surgical resection of the lesion. The affected jawbone most often requires reconstruction as there is extensive destruction of bone by the lesion. It takes years of experience to gauge the amount of bone that needs to be removed during jaw cyst surgery. We have been addressing such lesions in our hospital for over 30 years now.

Dr. SM Balaji, jaw cyst surgery specialist, has over three decades of extensive experience dealing with a variety of cysts. We have been recognized as the best jaw reconstruction hospital in India by our peers. This recognition has been achieved through consistent delivery of surgical excellence over the years.

We use a variety of modalities for performing jaw reconstruction. They include the utilization of grafts harvested from the patient. Consistent results and successful rehabilitation of patients have earned us the reputation of being the best jaw reconstruction hospital in India. We give importance to the establishment of overall oral health in our hospital.

Jaw reconstruction surgery is a specialty procedure performed at our hospital. Conditions such as open bite are addressed through surgery as well as orthodontic treatment in our hospital. We are a leading hospital for oral surgery in Chennai. We also have a well-equipped dental clinic in our hospital that addresses issues such as tooth decay.

Our hospital is a super specialty center for jaw cyst surgery and jaw reconstruction surgery. We have dealt with a wide variety of jaw lesions including dentigerous cysts, odontogenic keratocysts, ameloblastoma and various other conditions.

Our hospital is a leading center for orthognathic surgery in India. A recent pan Indian survey by a leading newspaper named us as the best jaw reconstruction hospital in India.

Patient Develops Swelling and Pain in the Lower Jaw

The patient is a 26-year-old male from Chalakudy in Kerala, India. He began noticing a slight swelling in the left lower jaw around a year ago. This began progressing further and he soon developed pain and tooth loosening at the site of the swelling. Alarmed over the events, he visited a local hospital.

Imaging studies and a biopsy were obtained at the hospital. Biopsy results came back positive with the diagnosis of odontogenic keratocyst in the left mandibular region. Treatment planning was explained to him and he consented to surgery.

The cyst was enucleated and the infected bone was debrided. There was a recurrence of the cyst in a few months and he underwent a second surgery. The second surgery was also unsuccessful with a resultant pathological fracture at the left parasymphyseal region.

He immediately presented again to his doctor in his hometown. Diagnostic studies were performed and revealed not only the fracture but also the recurrence of the lesion again. There was constant minor bleeding at the site of the surgery. Realizing the complexity of the presentation, they referred him to our hospital for management.

Initial Presentation at our Hospital for Surgical Management

Dr. SM Balaji, jaw cyst surgery specialist, examined the patient and obtained imaging studies. This demonstrated that there was a recurrence of the lesion along with a pathological fracture of the mandible. He explained that the patient needed to undergo removal of the recurrent lesion. This would be followed by jaw reconstruction surgery and subsequently by dental implant surgery.

Under general anesthesia, rib grafts were harvested from the patient to be utilized for jaw reconstruction. A Valsalva maneuver was performed to ensure that there was no perforation into the thoracic cavity. The incision was then closed in layers with sutures.

Attention was next turned to the odontogenic keratocyst. The patient’s recurrent lesion was resected in its entirety. The bone was debrided to reveal the fresh healthy bone. Harvested rib grafts were carefully crafted to fit into the bony defect in the mandible.

There was good recreation of bony anatomy at the site of the bony defect. The bone grafts were then fixed to the mandibular bone with titanium screws.

As instructed at the time of previous surgery, the patient returned in four months for dental implant surgery. Imaging studies revealed complete consolidation of the bone grafts with underlying mandibular bone. The long-term prognosis for this patient is very good.

There was a reestablishment of a good mandibular contour at the site of the surgery. The titanium screws that were used to fix the grafts were removed. This was then followed by the fixation of premium dental implants to the alveolar bone. Removable dentures are a poor substitute for dental implants.

The patient was instructed to return in six months for fixation of ceramic crowns to the dental implants. These replacement teeth (artificial teeth) will be perfectly shade-matched to his natural teeth. This period would allow for complete osseointegration of the implants with the alveolar bone.

The patient expressed understanding of the instructions and expressed his happiness at the standard of care in our hospital.