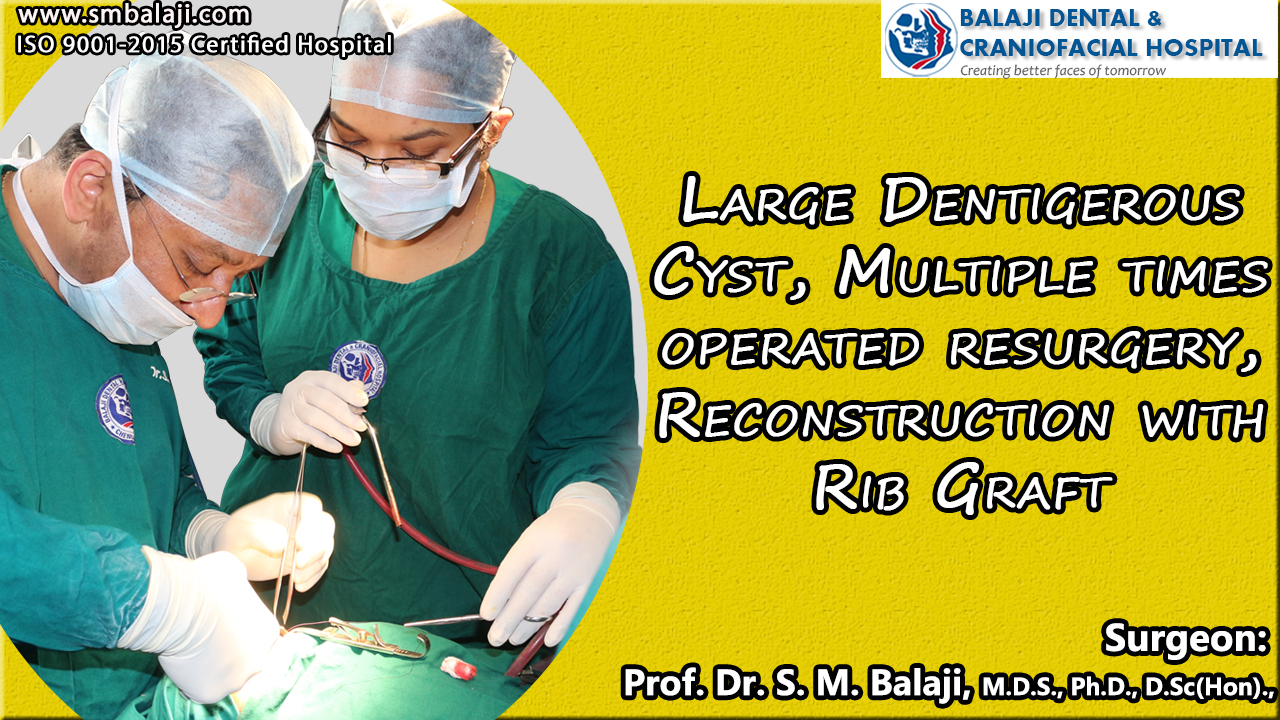 Patient with a history of a swelling of six months duration

The patient is a 28-year-old male from Gurdaspur in Punjab, India. He began noticing the development of a swelling in the right posterior mandibular region. The teeth in the region also slowly started to become mobile. The swelling as well as gradually loosening teeth in the region of the swelling began to alarm him greatly. He visited a local oral surgeon who examined the patient and obtained radiographic studies.

Complications arising from an incisional biopsy performed elsewhere
Following this, the oral surgeon had advised an incisional biopsy of the swelling be performed, the results of which came back as a dentigerous cyst. Teeth #46 and #47 were extracted at the time of the incisional biopsy. The oral surgeon then advised that the patient needed to undergo complete cyst enucleation, but the biopsy wound in the region persisted without healing. It presented as a large hole in the right lower back tooth region with resultant difficulty chewing and eating. He underwent enucleation of the cystic lesion thrice, but it recurred every time.

The surgeon soon realized that treatment of the cyst would require a great deal of expertise. So he referred the patient to our hospital for definitive surgical management and treatment. Our hospital is renowned for cyst removal surgery in India as well as for jaw reconstruction surgery in India.

An introduction into cysts

Cysts are noncancerous sac like structures that most often contain fluids, pus, gas, cheesy substances or even hair. They are very common and can occur anywhere in the body. The most common causative factor of cysts is an infection. Examples of cysts include epidermoid cyst, sebaceous cysts, ovarian cysts, follicular cysts, dentigerous cysts etc.

A dentigerous cyst is always associated with an impacted tooth. The lesion can be extensive and can involve the roots of adjacent teeth. Any teeth that are associated with the lesion will have to be extracted. This will result in an extensive area of edentulousness. There is also extensive destruction of the jaw bone by the cyst. This will need to be reconstructed using bone grafting obtained from the patient. Dental implants can be placed after consolidation of the grafts to rehabilitate the edentulous spaces. Artificial teeth are attached to the implants to complete the rehabilitation.

Facial plastic surgeons also perform reconstruction of jaws in the developed Western countries. However, it is oral surgeons in India who perform these surgeries.

The findings were explained to the patient in detail. Treatment planning included marginal resection of the lesion along with extraction of the teeth in the involved region to prevent recurrence of the lesion. The resultant bony defect would be filled in with the utilization of costochondral rib grafts harvested from the patient.

Surgical procedure for removal of the dentigerous cyst

Under general anesthesia, a right inframammary incision was first made through which a costochondral rib graft was harvested. A Valsalva maneuver was then performed to ensure that there was no perforation into the thoracic cavity. This was followed by closure of the incision in layers.
Following this, a crevicular incision placed in the mandible. This was then extended over the entire extent of the bony lesion following which a mucoperiosteal flap was elevated in the region.

This was followed by extraction of the involved teeth in region including the transalveolar extraction of the impacted third molar. This was then followed by complete enucleation of the cyst and marginal resection. An electrocautery was applied to the region to control bleeding and to ensure that there would be no recurrence of the lesion.

This was followed by flushing the entire site with antibiotic solution. The area of the bony defect was then packed with rib graft and fixed using titanium screws. Once complete hemostasis had been demonstrated in the region, the wound was closed with sutures.

Successful completion of the surgery

Surgery resulted in total removal of cyst. The reconstruction of the bony defect had resulted in the patient’s face regaining its original dimensions without the slightest asymmetry. It was explained to the patient that his lost teeth in the region could be replaced at a later date using dental implants. The patient was very happy with the outcome of the surgery. He said that he would present back again at a later date for rehabilitation through dental implant surgery. That way, he would be able to have a completely normal diet for full nutrition.