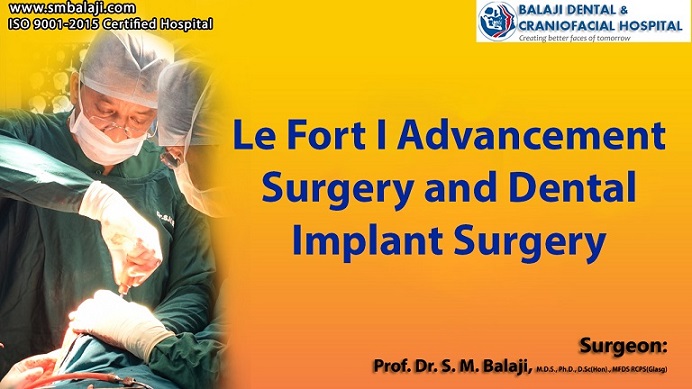 The patient is an 18-year-old male from Warangal in Telangana, India. He had been born with a bilateral cleft lip, palate and alveolus deformity. His distressed parents had been counseled extensively at his birth by a dental professional. It was explained to them that there was no reason for them to worry. They were informed that surgical intervention would completely normalize the baby’s deformities.

Successful surgical repair of his cleft lip, palate and alveolus on schedule

Parents had rigorously followed our advice regarding surgical intervention for his cleft defects. All the surgeries had been successful and the patient had met all his developmental milestones appropriately. The patient also underwent a pharyngoplasty at 3-1/2 years of age. He therefore had normal development of speech.

The parents were counseled that the patient needed to be routinely followed up by an orthodontist. His first orthodontic consultation was around the age of 9. He underwent palatal expansion at the age of 12. Palatal expansion is usually undertaken for correction of posterior crossbite. Skeletal anterior cross bite requires orthognathic surgery.

Orthodontic care can be commenced in patients with mixed dentitions. Many permanent teeth have erupted by this age. He also had many teeth from his deciduous dentition. Routine orthodontic intervention was undertaken.

With the passage of time, he however developed anterior crossbite due to a retruded maxilla. This began interfering with his speech and chewing too became difficult due to this. He was therefore scheduled for surgical advancement of his retruded maxilla. Board certified members of the American society of plastic surgeons also perform orthognathic surgery in America.

Dr SM Balaji, facial cosmetic surgeon, examined the patient and obtained imaging studies. The patient had an anterior skeletal crossbite due to his maxillary retrusion. This had been causing him problems with his eating and speech for many years now. There was also a degree of dental malocclusion with malaligned teeth.

The patient and his parents expressed understanding of the treatment plan and consent to undergo surgery.

The patient first underwent fixed orthodontic treatment. His dental arch form was restored and he was scheduled for surgery. His maxillary right central incisor, which was periodontally compromised, became mobile during the course of orthodontic treatment. It was therefore decided to extract it and replace it with a Nobel Biocare dental implant during surgery.

Under general anesthesia, a vestibular incision was made in the maxilla followed by a Le Fort I osteotomy. The maxilla was disjointed and advanced anteriorly. Occlusion was checked and it was then stabilized in position using titanium plates and screws.

Attention was then turned to the mobile central incisor, which was extracted. A dental implant was fixed in the socket and all incisions were closed with sutures. The patient and his parents were very happy with the results of the surgery. The patient now had a very pleasing profile with the forward advancement of the maxilla.

It was explained to the patient that a ceramic crown would be placed after osseointegration of the dental implant.