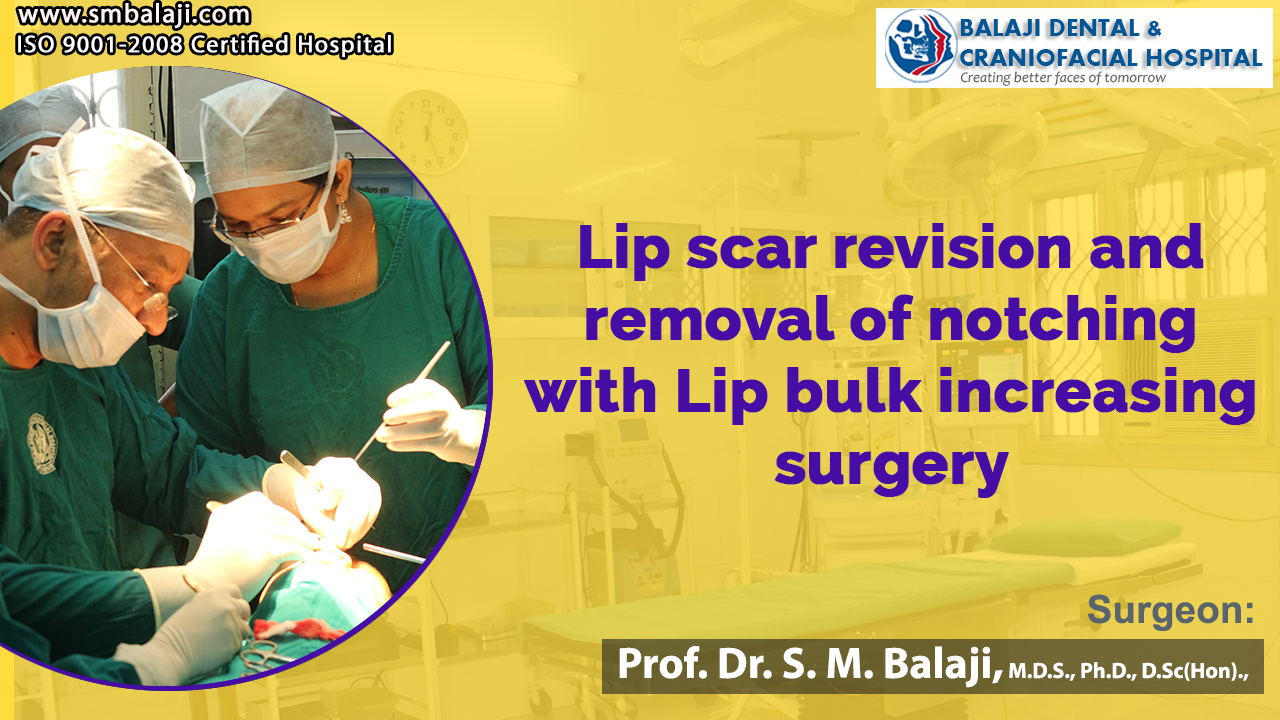 Environmental factors include smoking, exposure to excess second hand smoke, alcohol intake and usage of certain illicit drugs. A clear link has been demonstrated between these factors and increased risk for cleft lip and palate formation.

Cleft lip correction is performed at 3 months of age and palate correction is undertaken at around 10-12 months of age. The lip repair is an intricate surgery performed by the cleft lip surgeon. The upper lip consists of three segments, which fuses in utero to form the upper lip. A split lip occurs when fusion of these segments does not happen. The lip tissues consist of the epithelium and underlying dermis muscles. Cleft palate surgery is performed when there is a hole connecting the oral cavity with the nasal cavity in the roof of the mouth.

A lip correction surgeon has to perfectly align these three elements of the upper lip. Perfect fusion results in minimal scar formation, which slowly fades away with time. When this alignment is less than ideal, it leads to thickened scar formation and muscle contracture of the lips. This causes a lack of full lip seal and poor esthetics. Scar revision surgery is performed to remove any unsightly hypertrophic scar tissue. This plastic surgery is performed keeping in mind the tissue planes of the lip.

History of cleft lip surgery in the olden days

There was a period in human history where babies born with a cleft were considered to be evil and were abandoned and left to die. This was brought about by mainly superstition and ignorance. Such practices were the norm for many babies born with deformities during that period. It was only after science began taking roots within human society that superstition and ignorance were overcome by humans and people began looking for ways to alleviate human suffering.

Ancient China boasted of a remarkable degree of scientific knowledge compared to most other parts of the world. The world’s first cleft lip repair was performed in China even before the advent of Christianity in the world. Greek and Egyptian medicine was also remarkably advanced for the times, but records from that period of human history have unfortunately been lost.

Cleft lip closure was performed successfully essentially because it involved only the soft tissue. Any involvement of the bone automatically rendered the process very difficult and prone to failure. It was because of this that the first successful cleft palate closure was accomplished only sometime during the eighteenth century.

The patient is a young man of 22 years of age who had undergone lip and palate repair as an infant. He also has a history of undergoing pharyngoplasty surgery and repair of the soft palate. He now feels that his upper lip is too long and there is insufficient show of upper teeth during smiling. This had left him feeling despondent and withdrawn. The patient also felt that his upper lip lacked adequate fullness. His parents had presented to a local plastic surgeon in their hometown who felt that he needed cosmetic lip surgery. He then referred them to our hospital for surgical correction of his complaints.

Initial examination with treatment planning explained to the patient

Dr SM Balaji, cosmetic lip surgeon with over 27 years of experience in cleft lip and cleft palate repairs, examined the patient and ordered biometric studies. This revealed that the patient had a long upper lip without adequate fullness. The surrounding skin tone and texture was also noted. Patient expressed his desire for fuller lips. This called for lip augmentation or lip enhancement surgery.

He explained the treatment plan to the patient and his parents, which involved obtaining a fascia lata graft from the thigh region followed by a bullhorn incision to the upper lip at the base of the nose to shorten the upper lip. It was felt that artificial lip implants would not give optimal results in this case and there could also be adverse side effects.

The patient and his parents were in agreement with the treatment plan and consented to surgery. It was ascertained that the patient had no allergic reaction to any of the medications that would be used during and after surgery. The patient would be prescribed hyaluronic acid after surgery to improve healing of the wounds.

Under general anesthesia, the patient was prepped and draped for lip scar revision surgery. Markings for the bullhorn incision were made under the nostrils and extended downwards to include the scar from the previous cleft lip surgery. Incisions were then made along the markings and the hypertrophic tissue excised.

The fascia lata graft was then inserted into the upper lip to increase the fullness of the lip. Upper lip was then sutured back in a slightly superior position. This resulted in a lip length that was proportionate to the rest of the face.

Healing proceeded uneventfully with minimal residual scar formation. The patient and his parents expressed complete satisfaction at the results of the surgery before final discharge from the hospital.