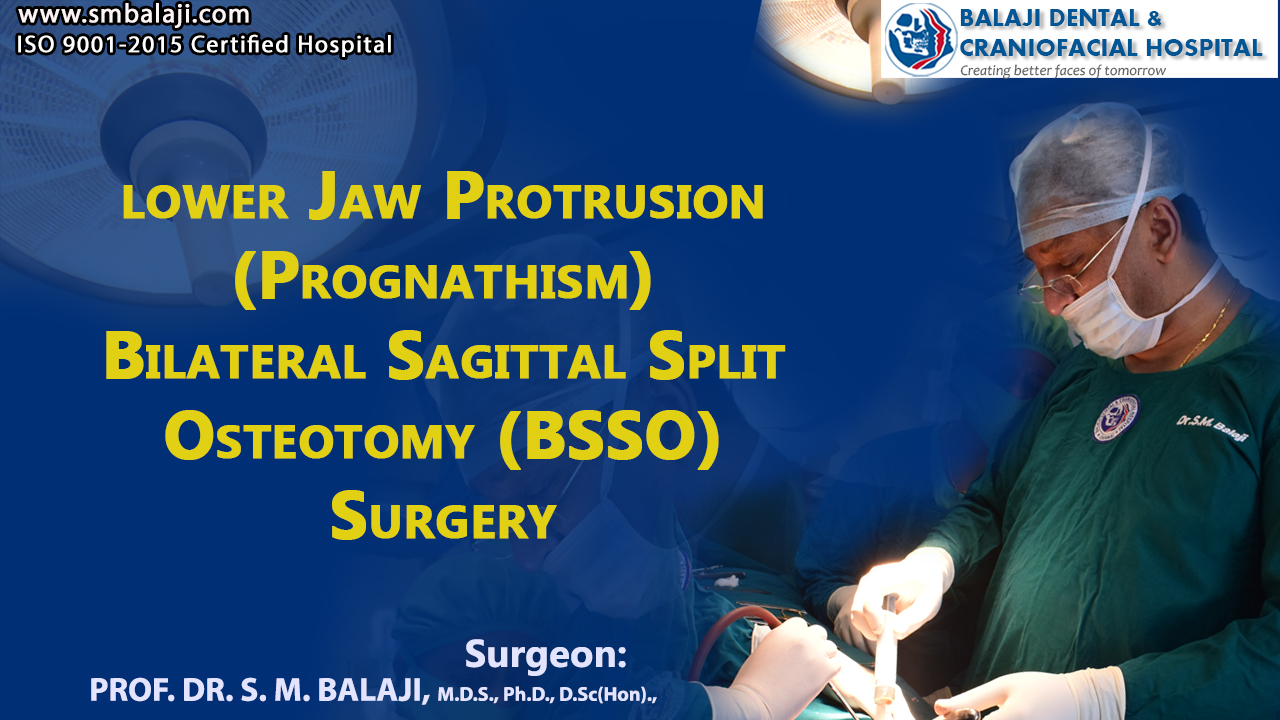 Excessive protrusion of lower jaw causes both esthetic as well as functional compromises. It falls under the ambit of facial plastic surgery because of the cosmetic correction. Fixed orthodontic treatment will also be needed to move teeth into correct alignment before the surgery. This tooth movement will lead to optimal results after the surgery. This protocol is followed by the American Association of Oral and Maxillofacial Surgeons. The orthodontic appliances used for this treatment is fixed appliances.

Both lower and upper jaw tooth correction is done through this treatment. Metal wires were employed back in the day for this, but modern technology has completely transformed this. Transparent or tooth colored wires are employed nowadays for this treatment. The position of the lower front teeth is most often brought to a vertical orientation for this surgery. The rationale behind this becomes clear after completion of the surgical procedures. Surgery includes backward positioning of the lower jaw in case of mandibular prognathism. The upper jaw position is not altered if the problem is associated only with the lower jaw.

The patient is a 25-year-old male from Palayamkottai in Tamil Nadu, India who has always had problems because of a large lower jaw. This had led to eating and speaking difficulties ever since he can remember. He has difficulty closing his mouth and has had chronic pain in his jaw joints because of this. The patient mentioned that he had a long lower jaw from a very early age. He had gone through depression at multiple stages of life due to his elongated lower jaw. He felt lonely and led a solitary life.

His parents had taken him to an oral surgeon at his hometown who had examined him. Realizing the complexity of the problem, the oral surgeon had referred the patient to our hospital for surgical correction of his oversized lower jaw. Our hospital is a renowned center for orthognathic surgery in India. Jaw reconstruction surgery as well as other facial cosmetic surgery procedures are commonly performed in our hospital.

What is mandibular prognathism?

Prognathism in humans can be due to normal variations among phenotypes. In human populations, prognathism may be a malformation, the result of injury, a disease state or a hereditary condition. This is considered a disorder only if it affects mastication, speech or social function as a byproduct of severely affected aesthetics of the face.

Mandibular prognathism is a protrusion of the mandible, affecting the lower third of the face. Pathologic mandibular prognathism is a potentially disfiguring genetic disorder where the lower jaw outgrows the upper, resulting in an extended chin and a crossbite. It is sometimes a result of acromegaly. This condition is sometimes colloquially known as lantern jaw or the Hapsburg jaw.

Initial presentation at our hospital for examination

Dr SM Balaji, facial cosmetic surgeon, examined the patient and obtained a detailed history. He ordered comprehensive imaging studies for the patient. The patient had an anterior crossbite with class III malocclusion. Treatment planning was presented to the patient and his parents. The patient was advised to undergo corrective lower jaw surgery. This was to be followed by fixed orthodontic treatment for management of his dental malocclusion.

Under general anesthesia, an incision was placed in mandibular retromolar region bilaterally. Flaps were then elevated in the region to expose the mandibular bone. Bone cuts were made and a bilateral sagittal split osteotomy was performed using the Obwegeser technique. The mandible was pushed backwards, occlusion was checked and the mandible was then fixed using Titanium plates and screws. Extreme care was taken to ensure the safety of the inferior alveolar nerve. The nerve in the proximal and distal segments was protected during this part of the procedure. Closure was then done using resorbable sutures.

The patient expressed total satisfaction at the results of the surgery. His facial esthetics was very pleasing and he now had a normal occlusion. His facial profile was also to his liking. He would have to return in a few months to undergo orthodontic treatment. This is for correction of his malaligned teeth.