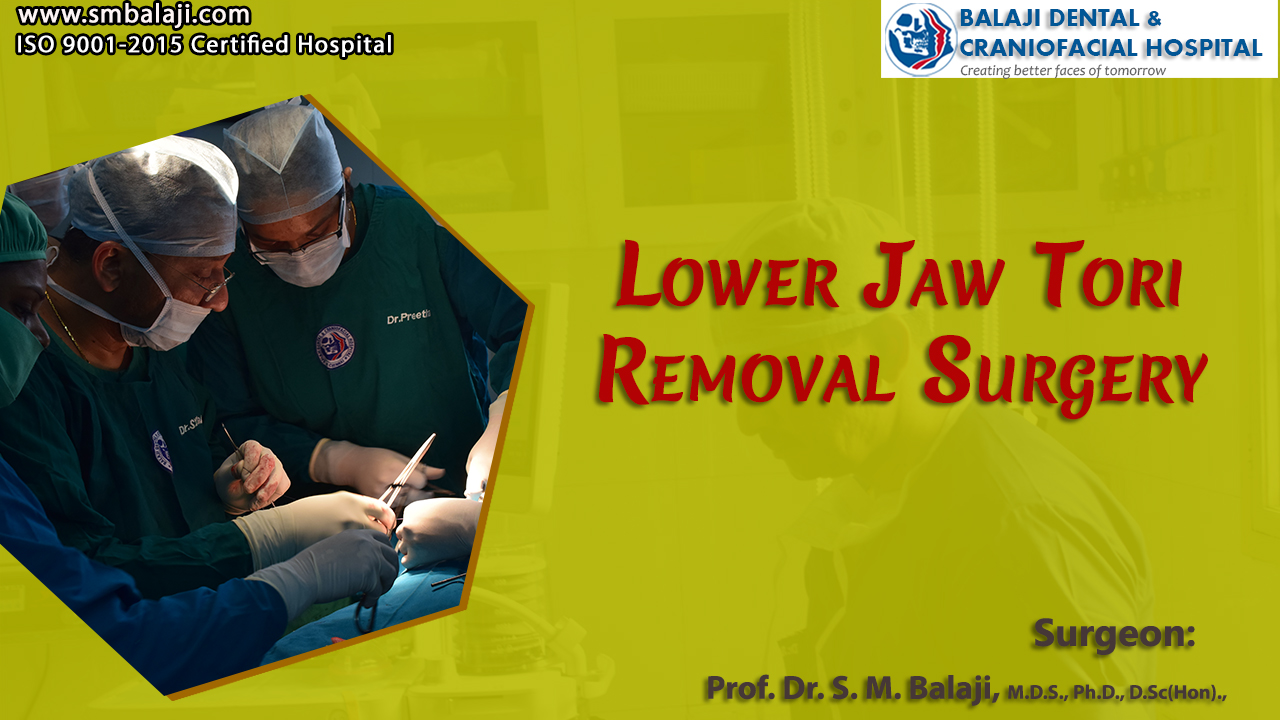 Patient begins to notice bony outgrowths in his mandible

The patient is a 33-year-old patient from Bagdogra in West Bengal, India who said that he had always had small bony protrusions on the inner side of his lower jaw ever since he could remember. He however said that he was never worried about it as it had never caused him pain or any sort of discomfort. It said that it was only recently that he had felt the need to get them removed and had approached a local oral surgeon in his hometown.

The surgeon had examined him thoroughly and also obtained radiological studies, which revealed multiple small bony prominences on the lingual aspect of the lower jaw. The patient was then informed that he had multiple mandibular tori. When the patient expressed his desire to have them removed, the surgeon referred him to our hospital for tori removal surgery as our hospital is renowned for jaw reduction surgery in India.

Our hospital rigorously follows all key surgical protocols laid out by the American Association of Oral and Maxillofacial Surgeons. Orthognathic surgery is another specialty surgery that our hospital is very famous for. Corrective jaw surgery and cosmetic surgery often overlap when it comes to correction of facial asymmetry that is caused by jaw deformities. Surgery is performed only after meticulous surgical planning has been carried out.

Torus mandibularis, their occurrence and etiology behind tori formation

Torus mandibularis is the formation of bony growths in the mandible along the surface nearest to the tongue. Mandibular tori are usually present near the premolars and above the location of the attachment of the mylohyoid muscle to the mandible. In more than 90% of the cases, occurrence of the torus is bilateral, making the presence of a unilateral torus a very rare finding. Dental professionals usually are the first to identify the presence of mandibular tori unless they are extremely large and interfere with functioning.

As the name suggests, tori are never found on the roof of the mouth. They never involve the upper jaw and are always found on the inner aspect of the mandible. The bone of the tori can often be harvested to be used for bone grafting. This makes for an ideal bone grafts material as it is harvested from the patient’s own body thus completely negating any chances of graft reduction.

The rate of occurrence of mandibular tori ranges from 5-40% of the population. They are usually very small and do not cause any inconvenience to the patient. The formation of mandibular tori could be due to several factors. They are more common in early adult life and are frequently found in patients with bruxism. The size of the tori may fluctuate throughout life. In rare instances, the tori can be large enough to touch each other in the midline of the mouth. Consequently, it is believed that the development of mandibular tori can also result from local factors and are not solely due to genetic influences.

Initial presentation at our hospital for management of his tori

Following successful induction of general anesthesia, a crevicular incision was placed in the lingual aspect of the mandible, which was followed by elevation of a mucoperiosteal flap. The mandibular tori were then exposed and subsequently reduced with the help of a round bur. The bony prominences were made flush with the surrounding bone. Closure of the incision was then done using resorbable sutures.

Patient expresses satisfaction at the results of the surgery

The patient was extremely happy with the results of the surgery and said that he would now return to his hometown in a peaceful state of mind.