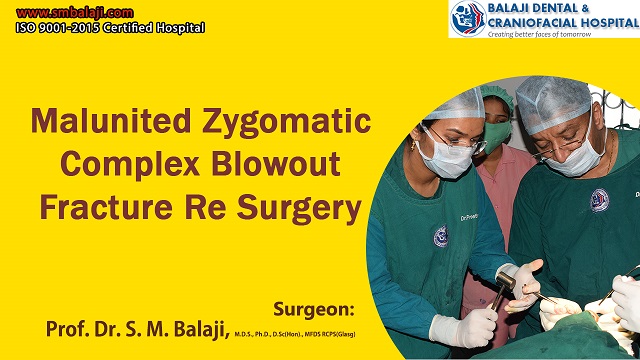 The patient is a 32-year-old woman from Bengaluru in Karnataka, India. Around three years ago, she had been on her way to work as usual on her motor scooter. A car had swiped her scooter from the side and she had lost her balance.

She ended up impacting her midfacial region on the edge of a culvert. The patient had passed out following the accident and an ambulance had been summoned.

Emergency treatment had been administered and imaging studies obtained of the facial region. This had revealed that there was a left zygomatic complex fracture with orbital floor blowout fracture. The patient had been presented with a treatment plan and had been operated on the day following the accident.

Soon after recovering from the surgery, the patient realized that she had developed double vision. There was also an esthetic deformity from the surgical correction. Her left eye was smaller and eye level was depressed. Even though this was disconcerting, it did not hinder her activities of daily living. She had learnt to live with it due to other important commitments.

Around a month ago, a friend who met her after many years expressed shock at her appearance. She said that the patient should not compromise on something as major as her health. Realization hit her with her friend’s insistence that she get this treated.

Her family too had been admonishing her for neglecting this. They then began making enquiries regarding the best treatment center to get her deformities addressed. They were referred to our hospital for management of her condition. Our hospital is a premier center for corrective facial surgery for failed surgeries performed at other centers.

The muscles of the floor of the orbit were also abnormally positioned as a result of the orbital floor blowout fracture. This also needed to be addressed and corrected for the patient to regain completely normal 20/20 vision. Detailed treatment planning was formulated and explained to the patient. She expressed approval of the treatment plan and consented to undergo surgery.

There would be no necessity for bone grafts with this surgery. When there is the necessity for a bone graft for a large defect, it is usually harvested from the iliac crest or the ribs.

Under general anesthesia, attention was first turned towards correction of the malunited zygomatic complex fracture. The plates from the previous surgery had been placed through a laceration that had resulted from the accident.

Dr SM Balaji accessed the malunited fracture site through an intraoral approach. This was to avoid scar formation. An angled screwdriver was utilized to remove the old plates and screws.

The malunited fracture segments were disjointed and the entire segment was upwardly and laterally rotated. This corrected the downwardly placed deformity of the left eye. This was then stabilized using titanium plates and screws.

Attention was then turned to repairing the blowout fracture of the orbital floor. A lateral canthal incision was made followed by a transconjunctival incision. The floor of the orbit was explored and all abnormal connective tissue and extraocular muscle attachments were released. The orbital contents were back in their normal anatomic position now.

Following this, a titanium mesh coated with Medpor was used to reconstruct the orbital blowout fracture. This was stabilized with screws to the inferior orbital border. All incisions were then closed with sutures. The patient was then extubated and taken to recovery in stable condition.

Complete normalization of the residual facial deformities from previous surgery

There was complete resolution of the patient’s facial deformities. Her eyes were symmetrical and there was complete resolution of her double vision. There were also no visible scars as the fracture had been approached intraorally. The patient and her family expressed their thankfulness to the surgical team before final discharge from the hospital.