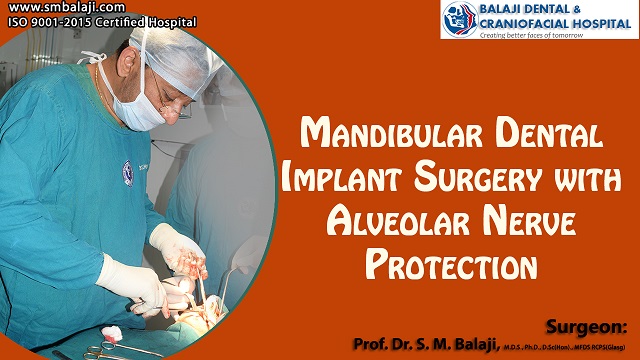 The patient is a 48-year-old male from Sambalpur in Odisha, India. He has a very strong family history of diabetes on both the paternal and maternal sides of his family. Diagnosis of early onset type 2 diabetes mellitus had been at the age of 28. He had however never shown any inclination to control it. His blood sugar levels regularly went off the charts and he has required innumerable hospitalizations in the past.

Ignoring the warnings of his dentist, he had lost most of his mandibular teeth within a few years. This very early edentulous state resulted in early resorption of his mandibular bone. His maxillary teeth were in no better shape and had severe gingival recession.

It has only been over the last two years that the patient has decided to lead a disciplined life. He started exercising regularly and strictly monitoring his dietary intake. His blood sugar levels have been normal for over a year now. There has been a tremendous improvement in his energy levels and his overall zest for life.

The patient however had already paid a heavy price with regards to his oral health. He had already lost most of his mandibular teeth and all his maxillary teeth were mobile. There was also a tremendous amount of alveolar resorption of the mandibular bone, which gave him a prematurely aged look.

Feeling depressed about this, he had approached a local dental surgeon for dental implants. Imaging studies had been obtained at the consultation. It was then that the dentist realized the complicated presentation due to the degree of alveolar resorption of the mandible. He explained the complexities to the patient and referred the patient to our hospital for treatment.

Our hospital is a leading specialty dental implant hospital in India. We specialize in total oral rehabilitation with the use of a variety of dental implants. Graftless zygoma implant surgery is utilized for patients who do not wish to undergo surgery under general anesthesia. Zygomatic implants enable rehabilitation of maxillary arch without grafts.

Over a 1000 patients have been successfully rehabilitated with restoration of a beautiful smile. Our hospital was one of the first to offer implant dentistry in India. Tooth replacement is most convenient for the patient with implants, particularly for full mouth rehabilitation. Implantology is also a subdivision of maxillofacial surgery. Conventional implants need bone grafts in case of severely resorbed arches.

Complications of his presentation explained during treatment planning

Dr SM Balaji, dental implant specialist, examined the patient and obtained imaging studies including a 3D CT scan. He explained to the patient that the lower arch would be addressed first. Imaging revealed that there was significant resorption of the mandibular alveolar ridge. This would result in upward migration of the mental nerve towards the ridge.

It was explained to the patient that implant placement distal to the mental nerve could be easily accomplished. The patient was made to understand that proximal implants could be placed only after careful mapping of the mental nerve. This would ensure that there was no nerve damage during placement of the implants.

The patient and his family expressed understanding of the treatment plan and consent to undergo surgery.

Under general anesthesia, a supracrestal incision was made and a flap was raised. The alveolar crestal bone was exposed and mental nerve identified. Six Nobel Biocare dental implants were carefully affixed for rehabilitation of the mandibular dentition. The flap was then closed with sutures followed by removal of the mobile maxillary teeth.

Postoperatively, there were no signs of numbness or symptoms of damage to the nerve. Instructions were given to the patient to return in six months after completion of osseointegration of his mandibular implants. It was explained that maxillary rehabilitation will be undertaken at a later date.

The patient and his family expressed understanding of the instructions and thanked the surgical team before discharge from the hospital. The importance of keeping his blood sugar levels under check were reiterated to the patient. He stated that he has now made drastic lifestyle changes. This would enable him to enjoy greater health in the days to come.