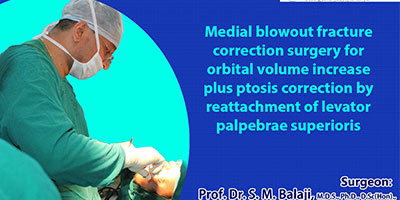 This young woman is from Tirupur, Tamil Nadu. A road traffic accident resulted in injury around the left eye. This had resulted in a blowout fracture of the left eye. Surgery elsewhere resulted in a sunken left eye and residual ptosis. This was the result of fat herniation into a medial orbital wall fracture. A local oral surgeon referred her to our hospital for surgical correction.

The levator palpabrae superioris was next addressed. An incision was first made at the old scar site. The muscle was then accessed and a suture used to attach it to the orbicularis oculi. This incision was also closed with fine sutures.

The patient’s eye function was then tested after recovery from general anesthesia. The patient had symmetrical eyes with correction of the left eye ptosis. The patient expressed her satisfaction before discharge from the hospital.