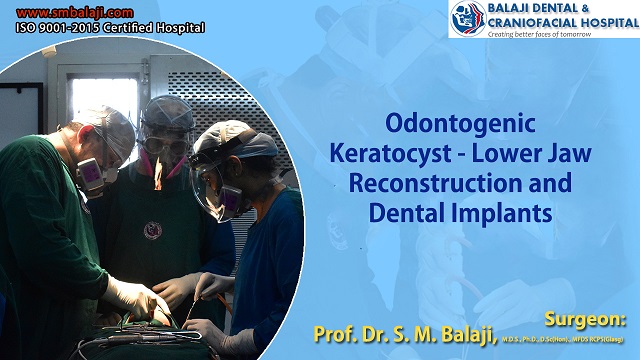 What is Odontogenic Keratocyst

The cyst that develops from the cell rests of the dental lamina is known as an odontogenic keratocyst (OKC). It can appear anywhere in the mouth but is most commonly found in the mandible’s posterior region.

Cells and tissues involved in natural tooth growth give rise to odontogenic jaw tumors and cysts. Other cancers that involve the jaws can be nonodontogenic, which means they can arise from tissues within the jaws that are unrelated to the teeth.

How is odontogenic Keratocyst treated?

Decompression, marsupilization, enucleation with or without adjunct (Carnoy’s solution, cryotherapy), and resection were also implemented as surgical methods. keratocystic odontogenic tumour (KCOT)  may be handled conservatively with enculation and Carnoy’s solution or cryotherapy, depending on other research.

Initial Diagnosis in his Hometown

The patient is a 24-year-old male from Karur in Tamil Nadu, India. Approximately two years ago, he began developing swelling in his anterior lower jaw. At first, he had neglected it, but it continued to grow. Alarmed at the increase in size, he presented to a local oral surgeon.

He had undergone examination followed by a biopsy of the lesion. This returned with a result of odontogenic keratocyst. It was explained that though it was benign, it was also aggressive. The lesion extended from the left second premolar to the right second premolar.

Referral to our Hospital for Management of His Jaw Lesion

He was advised to undergo jaw resection surgery at the earliest. A referral was made to our hospital as we are one of the leading oral surgical hospitals in India. Our hospital is a leading jaw reconstruction center in India. Patients with loss of bony tissue in the jaws are referred to us for corrective surgery.

Reconstruction from cystic lesions like dentigerous cyst is also performed in our hospital. Jaws are affected by various odontogenic cysts. The lower jaw is more affected more than the upper jaw. Cyst repair surgery of the jaws requires reconstruction for correcting the bony defect left by the cyst.

Oral and Maxillofacial Surgeon with over 30+ Years Experience

Our hospital is a specialty center for jaw repair surgery. Jawbone surgery can involve either reduction or reconstruction of jaws. Bone repair surgery lies within the purview of oral surgeons and orthopedic surgeons.

It was also explained to him that rib grafts would be used for jaw reconstruction surgery. Total rehabilitation would include the replacement of lost teeth with dental implants. He then consented to undergo surgery.

Surgery commenced with harvesting rib grafts for jaw reconstruction. A Valsalva maneuver confirmed that there was no perforation into the thoracic cavity. The incision was then closed in layers.

The affected region of the law was next resected. This was followed by reconstruction of the jaw with the rib graft. Titanium screws were used to fix the grafts to the jaw. The patient was advised to return in four months after the consolidation of the grafted bone with the jaw.

Placement of Dental Implants after Consolidation of Graft Bone

He returned six months later and imaging revealed a union of the graft with the jawbone. A flap was then raised and the titanium screws were removed. Premium dental implants were then fixed to the reconstructed jaw bone. This would undergo osseointegration with surrounding alveolar bone in 4-6 months.

Shade-matched ceramic crowns would be placed over the dental implants. This would be fabricated in our in-house dental laboratory. The patient would have full restoration of function following treatment at our hospital.