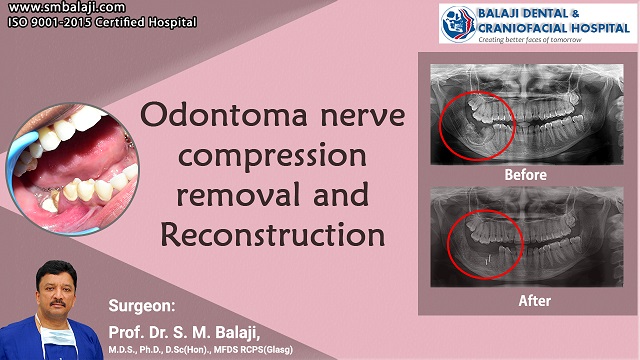 What is an Odontome and how is it formed?

An odontome is a benign tumor, which is linked to the abnormal development of a tooth. It is a hamartoma and is composed of irregularly placed normal tissue. This can involve both hard tissue as well as soft tissue. Odontoma was the previously used terminology for an odontome.

Extraction of the unerupted odontome is the usual treatment of choice. This is akin to surgical removal of impacted third molars. Impacted mandibular odontomes are usually found deeper in the jawbone, being in close proximity to the inferior alveolar nerve. An improper surgical technique can lead to damage to the nerve.

Successful extraction of an impacted mandibular odontome requires a lot of experience. The best possible results are obtained by surgery performed by experienced oral and maxillofacial surgeons. Oral surgery is one of the specialties of dentistry. Our dental clinic in Chennai is a premiere center for oral surgery.

Dr. SM Balaji, Oral and Maxillofacial Surgeon, has over three decades of experience in dealing with the extraction of impacted teeth. Our hospital is considered to be the best wisdom tooth surgery hospital in Chennai. We perform chair-side wisdom tooth surgery for simple cases. Extraction of complicated impacted wisdom teeth is performed in the operation theatre under general anesthesia.

Our expertise in ensuring the best possible surgical results for patients is hard-earned. This has earned us the title of best wisdom tooth surgery hospital in Chennai from both our peers and patients alike. We handle the most complicated cases of impacted wisdom teeth. They even present near the lower border of the mandible as well as near the orbital cavity.

Our hospital is equipped with the latest technological advancements to offer the best possible treatment for our patients. The dental services provided by our hospital are amongst the best in the entire nation. We are a tertiary centre for specialized world-class dental care in India.

Patient Presents to our Hospital for Definitive Treatment of Odontome

The following case is a description of a patient who came to our hospital for treatment of an odontome. There was also compression of the inferior alveolar nerve by the odontome. The odontome was extracted with minimum trauma along with an associated impacted tooth. There was no compromise of nerve function following the surgery.

Failure of Initial Treatment Elsewhere for the Patient

The patient is a 25-year-old female from Gingee in Tamil Nadu, India. Around 18 months ago, she had presented at a local hospital with pain and mild swelling in her mouth. This was at the site of a missing first molar tooth on the right side of her lower jaw. Imaging studies had been obtained, which revealed an impacted first molar and a partially formed second molar.

There was a radiopaque shadow around the second molar. The second molar tooth was in close proximity to the inferior alveolar nerve. This was diagnosed as an odontome and extraction were recommended to the patient. However, the attempt to extract the two teeth was abandoned midway with the removal of the crown of the impacted first molar. There was no occurrence of a dry socket.

The patient was advised to seek treatment at a superspecialty center, but failed to do so. It was only 18 months later that the patient presented to our hospital. The swelling and pain with paresthesia at the site of the attempted extraction forced her to address this.

Initial Presentation and Treatment Planning at our Hospital

Dr. SM Balaji, Wisdom Tooth Impaction Surgeon, examined the patient and ordered imaging studies. This revealed the first molar with the missing crown and partially formed the second molar. The second molar was diagnosed as an odontome.

There was also a draining sinus at the site of the attempted extraction. Compression of the nerve by the odontome was diagnosed as the cause for her paraesthesia. Treatment planning was explained to the patient and her attendants in detail. She expressed understanding and consented to undergo surgical removal of the impacted teeth.

The patient was taken to the operating room and anesthesia was induced. Prepping and draping were done to have the wisdom tooth removed. Tooth removal was preceded by an incision of the gum tissue overlying the region. The impacted wisdom tooth was then exposed following removal of overlying bone.

Both teeth were then extracted followed by debridement of granulation tissue at the site. There was a complete resolution of the patient’s complaints following surgery. A rib bone graft harvested at the time of surgery was used to reconstruct the bony defect at the surgical site. This was fixed with titanium screws.

Postoperative instructions were given to the patient. She will return in six months following complete consolidation of the bone graft with surrounding alveolar bone. Dental implant surgery would be performed at that time with the placement of premium dental implants. Ceramic crowns would be fixed to the dental implants following osseointegration of the implants to the mandibular bone.

The patient was very happy with the level of care at our hospital. She also expressed a complete understanding of the instructions given by hospital staff before discharge from the hospital.