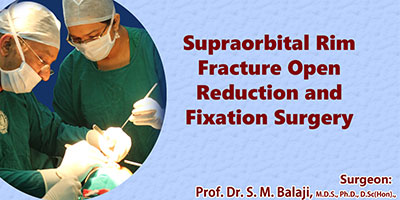 The patient suffered a trauma to the right supraorbital region. This resulted in a comminuted fracture of the supraorbital region with involvement of the rim. He presented to our hospital for definitive management of his fracture.

Examination of the patient with treatment plan presentation

Dr SM Balaji, facial trauma care specialist, examined the patient and ordered a 3D CT scan of the region. This demonstrated a comminuted supraorbital fracture of the frontal bone. The treatment plan was then explained to the patient who consented to surgery.

Successful rehabilitation of the patient after comminuted frontal bone fracture

There was no residual deformity of the region after surgery. The patient expressed total satisfaction at the results of the surgery before discharge.