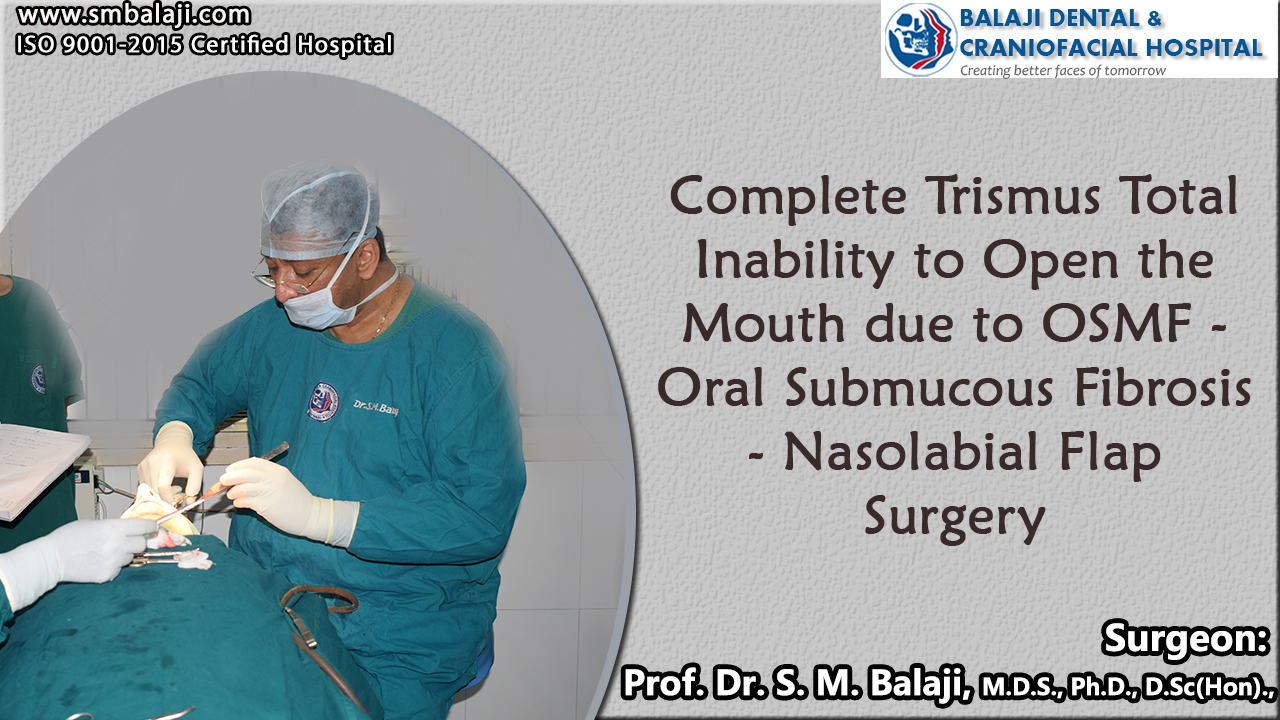 The patient is a 65-year-old man from Patna in Bihar, India who has been noticing a gradual tightening of the facial structures involving his cheek and oral mucosa over the past six years. It has reached the point where he is able to open his mouth only minimally. The soft tissues had become very fibrous and hardened. He has been having difficulty with speech and eating since that time. There was also a burning sensation to his cheek whenever he ate even minimally hot and spicy food. He had been neglecting this since the time he first noticed this.

It was only recently that his son noticed the difficulties faced by his father. This worried his son greatly and he took his father to a local oral surgeon for examination. They were informed that he had oral submucous fibrosis. He has a history of having smoked cigarettes over 40 years ago.
The patient and his son were counseled that surgical treatment was the only option to help relieve the patient’s difficulties with mouth opening. They were further informed that this was a highly specialized surgical procedure that was performed in only a few centers in India. The patient was then referred to our hospital for definitive management of his oral submucous fibrosis as our hospital is renowned for oral submucous fibrosis surgery. This surgery enables increased mouth opening for the patient.

What is oral submucous fibrosis?

Oral submucous fibrosis is a premalignant condition of the oral cavity that causes thickening of the cheeks through formation of fibrous bands in the submucosal layer. This oral premalignancy results in greatly decreased ability to open one’s mouth with resultant difficulties with eating and speech. Premalignant lesions have to be dealt with extreme urgency and caution by both the patient and doctors. If ignored by the patient, it will lead to oral cancer. This is amongst the most common head and neck premalignancies that is caused by adverse habits.

The disease progression is gradual but irreversible and progresses until the patient is unable to open his mouth. This is mainly brought about by tobacco abuse and alcohol abuse. Usage of areca nut or betel quid chewing, which is a habit predominantly seen in Southeast Asian countries also can lead to oral submucous fibrosis. These are the most common risk factors for the development of oral submucous fibrosis.

Initial presentation at our hospital for consultation and treatment planning

Dr SM Balaji, oral submucous fibrosis surgeon, examined the patient and obtained a detailed history. This condition falls under the purview of experienced oral and maxillofacial surgeons. The patient had a mouth opening of about 7 mm. Clinical examination revealed thick fibrous bands in the buccal mucosa bilaterally. There were also noticeable reddish spots in the left buccal mucosa and whitish patches in the tongue and buccal mucosa. The patient was given the diagnosis of oral submucous fibrosis and suspected candidiasis. Candidiasis is a fungal infection that is caused by any of the fungi belonging to the Candida family. Candidal infection of the oral cavity is known as thrush. It is manifested in the form of white patches on the tongue and other areas of the mouth and throat.

The plan of treatment was explained to the patient and his son in detail to include excision of the fibrous bands followed by covering the raw area with flaps taken from the nasolabial region. Patient and his son were in agreement with the treatment plan and signed the informed consent.
Surgical procedure to address the patient’s problems

The patient underwent awake bronchoscopic intubation as he was unable to open his mouth adequately to be intubated orally. Following successful intubation, markings were made for the incisions along the natural skin creases to avoid visible scar formation. Following this, a linear horizontal incision was placed in the buccal mucosa bilaterally. The fibrous bands were then carefully excised. An elliptical incision was then placed in the nasolabial region bilaterally and inferiorly based nasolabial flap elevated. Blood supply to the flap was from the facial artery.

Adequate care was taken to ensure that good blood supply was maintained to the flap throughout. Tunneling was then done and the flap was rotated intraorally and sutured to the buccal mucosa using resorbable sutures. An increase in mouth opening to about 3.2 cm was achieved following the surgery. A biopsy was also taken from the region.

Successful increase in mouth opening for the patient

Surgical outcome was as planned in the presurgical planning phase. Adequate mouth opening was achieved postsurgically. The patient was advised to do mouth opening exercises to further improve his mouth opening. There was hardly any noticeable scar in the nasolabial region at the patient’s one month follow-up visit. The biopsy results returned positive for candidiasis and the patient was placed on antifungal medications.