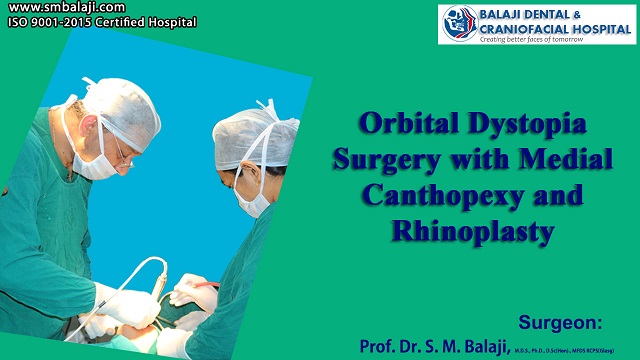 One of the most common clinical symptoms of craniofacial malformation is orbital dystopia. The concept dystopia refers to the orbits’ mono- and bilateral asymmetry in at least one of the three-dimensional planes. The clinical examination of the patient is used to make the diagnosis, which is supported by diagnostic instruments such as teleradiography in both normal projections, axial computed tomographic (CT) scans at a rate of 1:1 via the neuro-orbital plan, and three-dimensional CT.

This is a 24-year-old man from Ranchi in Jharkhand, India. He had been involved in a horrific road accident. There was also blindness caused by the loss of his left globe. This had resulted in left-sided facial fractures involving his middle facial region. These fractures involved many bones causing asymmetry.

There was the involvement of his orbital bone, nasal bone, zygoma and maxilla. He had undergone a series of surgeries in various hospitals. These had left him with a facial asymmetry and severe orbital dystopia.

He descended into a depression because of the turn of these events. His worried parents had consulted far and wide for the best hospital to address his problems. They were referred to our hospital by a leading plastic surgeon in their hometown. They contacted our hospital manager and fixed an appointment for a consultation.

Our hospital is a leading center for redo facial trauma surgery in India. Many patients with complications arising from surgery performed elsewhere present to our hospital. Our hospital serves as a tertiary referral center for craniofacial surgery in Asia.

We are a specialty center for prosthetic eyeball surgery in India. Our in-house prosthetic laboratory provides custom-made shells to many centers around the country.

Dr SM Balaji, facial cosmetic surgeon, examined the patient and obtained imaging studies. The patient had gross facial asymmetry. This was caused by the malunion of the facial fractures. There was a widening of the canthal bay due to the nasoorbitoethmoidal fracture.

He also had a depressed nose due to a fracture of the nasal bone. CT scans were also obtained for the evaluation of the cribriform plate. Treatment planning was presented to the patient and he consented to surgery.

A costal cartilage graft was first harvested to augment the depressed nose. The sites of the malunited fractures were then accessed. The plates from the previous surgeries were also removed.

A Titanium mesh with Medpor was then introduced through the subconjunctival incision. This resulted in the reconstruction of the fractured orbital floor. A lateral canthopexy was then performed for the correction of the canthal bay deformity.

The patient expressed his satisfaction with the results of the surgery. His parents too conveyed their gratitude before final discharge from the hospital.