Recontour and Restoration of Health for Drug Induced Swollen Gums

Recontour and Restoration of Health for Drug Induced Swollen Gums 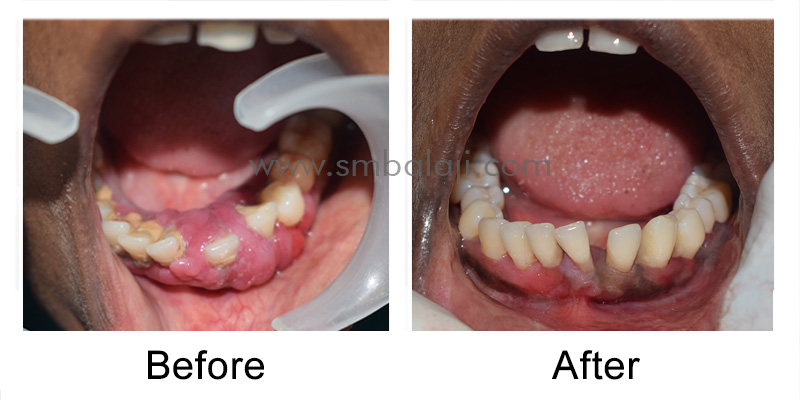 A 32 year old female patient approached our dental hospital, alarmed on noticing her gums getting inflamed and expanding in size for the past 6 months. Patient gives a history of profuse bleeding of gums while brushing and persistent bad breath. Initially, when the swelling started, the patient had convinced herself that it would heal by itself. Unfortunately, her gums have continued to overgrow to a significant size, over the period of time. The patient feared to speak confidently.

She was not able to eat food properly, as her gums were painful at times.  She worried that her bad breath could ruin the relationship with her fellow mates. Her swollen gums looked unpleasant and moreover, had compromised her oral functions. Hence patient demanded for a solution to her long-standing problem.

Patient was known to be hypertensive (a person with high blood pressure) and on antihypertensive drug (TAB NORVASC 5MG) once a day for the past 5years. A thorough blood investigation revealed no systemic abnormalities.

On clinical examination, there was generalized inflammation of her gums. However, the gum tissue surrounding her lower front teeth were enormously enlarged in size. There was profuse bleeding from the inflamed gums on slight touch. The patient had mild to moderate pain at the relative site on palpation. Moreover, the teeth were covered with severe tartar and stains, owing to the poor oral hygiene followed by the patient. This buildup of bacteria in her mouth induced inflammation and gave off unpleasant odor.

In correlation with the medical history of the patient, this sudden abnormal enlargement of the gums were seemed to be induced by the intake of the antihypertensive drug. Tab Norvasc , which is a composition of `AMLODIPINE’ is said to be widely associated with gingival overgrowth. In general , antihypertensive drugs, anticonvulsant drugs and immunosuppressant’s are commonly associated with gingival enlargement. Not many patients are aware of its side effects on oral health. These drugs increases the accumulation of connective tissue in the gums, leading to DIGO (Drug induced gingival overgrowth).

On view of the patient’s condition, Our highly skilled periodontist (gum specialist), under the guidance of Dr. SM Balaji planned to perform full mouth curettage followed by correction of lower jaw gingival overgrowth by gingivectomy  under local anesthesia.

Gingival curettage is a method, performed to clean the parts of teeth, which are below the gum-line and cannot be reached with a toothbrush. It is done to remove plaque and tartar from the tooth roots. Eventually, gums heal and tighten around the tooth again.

Gingivectomy is a surgical procedure done to remove and reform the excessively overgrown gum tissues.

The treatment procedure and the maintenance to be followed were clearly explained to the patient. Patients consent was obtained.

Before initiating the procedure, patient was referred to physician for his consent and consideration for substitution of drug (amlodipine) with other antihypertensive drug. Meanwhile the patient was asked to maintain a strict oral hygiene. Patient reported after 2week, on discontinuing the drug for the dental procedure.

Prior to gingival curettage, Phase I of superficial scaling was performed on the patient to remove stains and tartar above the gum line. Once local anesthesia was administered to the patient, Phase II of gingival curettage was carried out. The procedure was performed with a hand- activated instrument called `periodontal curette’. This is a typical instrument used to remove the hard tartar on the root surface of the tooth. The curette is placed inside the gum, adapted to the root surface, and pulled out, removing the bacteria filled deposit. This results in a smooth root surface, free of plaque and calculus. Followed by this Phase III of Gingivectomy is carried out. The diseased gingival tissue is surgically cut and removed, re-contouring the lower jaw gums to a more natural state. The gum tissues are approximated with absorbable suture.  The procedure is completed with a chlorhexidine mouth rinse.

Patient was put on antibiotics and painkiller for 5 days. A chlorhexidine mouthwash was prescribed to be used for a duration of 2weeks. Post- surgical sensitivity of the teeth was managed with a desensitizing toothpaste. Consistent proper oral hygiene maintenance was recommended to achieve the desired result and to prevent further gum infection. Patient was asked to report after 2 weeks.

The patient reported after 2 weeks. Clinically, there was no sign of inflammation. Healing was uneventful. The gingival tissues were well adhered to the teeth. Patient happily reported that there was no sign of gum bleeding while brushing.  Also, she felt confident to speak, as her bad breath vanished! Instructions on home care routine was given, as re- occurrence of gum infection and periodontal pockets, solely depends on the patients oral care habit and maintenance. Patient is on a regular follow-up.