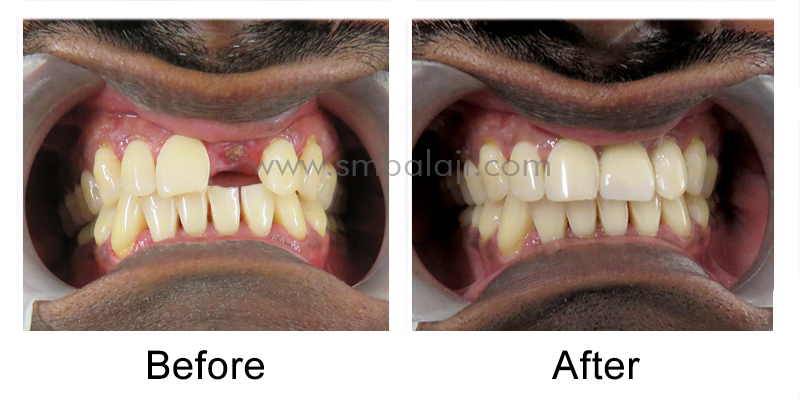 This is a case of a 36year old male with a complaint of broken crown in the upper front tooth region. He stated that his kid accidently hit him on his face the day before, which dislodged the crown in his upper anterior tooth right away. He gives a history of root canal treatment been done to the involved tooth 2years back elsewhere due to decay and discolouration. Now that the broken crown had come out, he felt less confident to speak or smile. He desired to restore the involved tooth with a new crown at the earliest.

Patient had no medical history.

On clinical examination, the upper front tooth seemed to be extensively broken with only the root portion of the teeth remaining. No pain in the involved tooth. No laceration seen in the surrounding gum tissue. No extra oral injury seen.

On examination, the upper anterior had insufficient tooth structure to support and retain a dental crown, hence Implantologist, Dr.SM Balaji suggested to extract the broken teeth followed by dental implant placement under local anesthesia. Later, replacement of the crown portion of tooth with a fixed prosthesis. Alternatively, treatment of dental bridge placement using the support of the adjacent teeth was also suggested. Finally, he opted for dental implants, understanding that it was the best treatment plan for him. Patient’s consent was obtained.

Under local anesthesia, Dr.SM Balaji extracted the broken upper front tooth. Secondly, dental implant of appropriate height was fixed directly into the empty tooth socket without reflecting the gum tissues. Followed by this, a lightweight temporary prosthesis was fixed onto the dental implant to replace his missing tooth for the time being.

Post surgical oral care instructions given. The patient was asked to report after 3 months for the final prosthesis placement, in order to let the dental implant completely integrate with the jaw bone.

He reported back after 6 months for the final prosthesis. Post operative OPG taken shows osseointegrated dental implant with no pathological findings. Hence final measurement was taken to fabricate the fixed prosthesis accordingly.  A natural looking Zirconia prosthesis was fixed onto the dental implant. The prosthesis was a perfect match to his natural teeth. The patient was very happy with the treatment outcome.