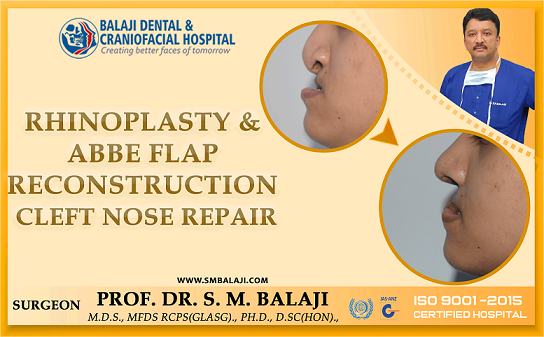 Past history of surgical correction of congenital cleft lip, palate and alveolus defect

The patient is a 21-year-old female from Ongole in Andhra Pradesh, India. She was born with a bilateral cleft lip, palate and alveolus defect. There was an oronasal communication through the roof of the mouth. Her parents were extensively counseled at the time of birth. They were then referred to our hospital for surgical management.

Her parents followed instructions meticulously and she underwent bilateral cleft lip repair at 3 months of age. The initial surgery was followed at 8 months by cleft palate repair. She also underwent premaxillary setback with bone grafts to the cleft alveolus at 7 years of age. A sphincter pharyngoplasty was performed at 3-1/2 years to address her speech problems.

Orthodontic intervention at our hospital for correction of malaligned teeth

She has been under the care of an orthodontist since the age of 9 at our hospital. Rapid palatal expansion had been done for the patient to correct her posterior crossbite. She also underwent fixed orthodontic treatment for correction of her malaligned teeth. The patient also had congenitally missing maxillary teeth due to her cleft alveolus deformity.

With the passage of time as the patient grew up, her nasal deformity however became more pronounced. Her columella was collapsed to the point that it appeared to be absent.

This caused her nose to be extremely flattened and blunt. Her prolabium was also extremely stunted. She would require a nose job. No nasal tip graft would be required in this case. It was therefore decided to surgically correct her cosmetic nasal defects.

Plastic surgeons also perform this surgery in the Western countries. Head neck specialists are often cosmetic as well as maxillofacial surgeons. They need to be board certified to perform these surgeries. Reshaping of bone and cartilage is often required for many facial plastic surgeries.

Presentation for nasal cosmetic surgery to be performed at our hospital

Dr SM Balaji, cleft cosmetic surgeon, examined the patient. She had an extremely shortened columella along with a stunted prolabium. Meticulous treatment planning was done for the patient. It was decided that both the issues needed to be addressed.

The congenitally missing maxillary teeth would be addressed later through the placement of dental implants. Her columella would be reconstructed utilizing a flap taken from the prolabium. This would be followed by an Abbe flap reconstruction of the ensuing upper lip defect.

The patient and her parents were in complete agreement with the surgical plan and consented to surgery.

Under general anesthesia, incisions were made in the region of the stunted prolabium. This was followed by dissection of the columella. The medial and lateral crus of the nasal septum were then identified. These were then brought together to form the alar dome.

This would help in creating a more prominent and sharp alar dome. The prolabium was then utilized to reconstruct the columella and lengthen it.

The patient would not be able to open her mouth for two weeks. During this time, the flap would be deriving its blood supply from the inferior labial artery of the lower lip. Once vascularity to the flap had been established from upper lip blood vessels, it would be separated from the lower lip.

The flap was separated from the lower lip and demonstrated good blood supply from the upper lip. She now had a prominent nose with a long columella as well as a lengthened prolabium. The patient and her parents were very happy with the results of the surgery. They thanked the surgical team and explained that this would transform her life before final discharge.