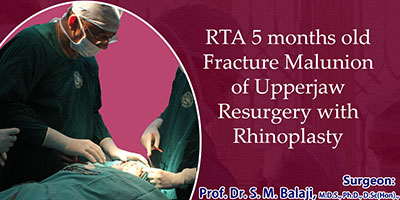 This young lady is from Salem, Tamil Nadu. A road traffic accident five months ago resulted in fractures to her maxilla and a comminuted nasal bone fracture. Emergency surgery elsewhere left her with a flattened bridge of the nose and an open bite. Feeling very dissatisfied, she approached a local surgeon who referred her to us.

Dr SM Balaji, nose correction and facial deformity correction specialist, examined the patient. He ordered imaging studies for the patient. He decided on a LeFort I maxillary osteotomy for the open bite correction. Treatment plan was then explained to the patient in detail. The patient was in agreement and consented to surgery.

The flattened bridge of nose was then addressed. The rib graft was first crafted to the right size. It was then tunneled to the bridge of the nose through a transcartilaginous incision. This resulted in a straight profile to the patient’s nose. The incision was then closed with sutures.

The patient expressed complete satisfaction before discharge from the hospital.