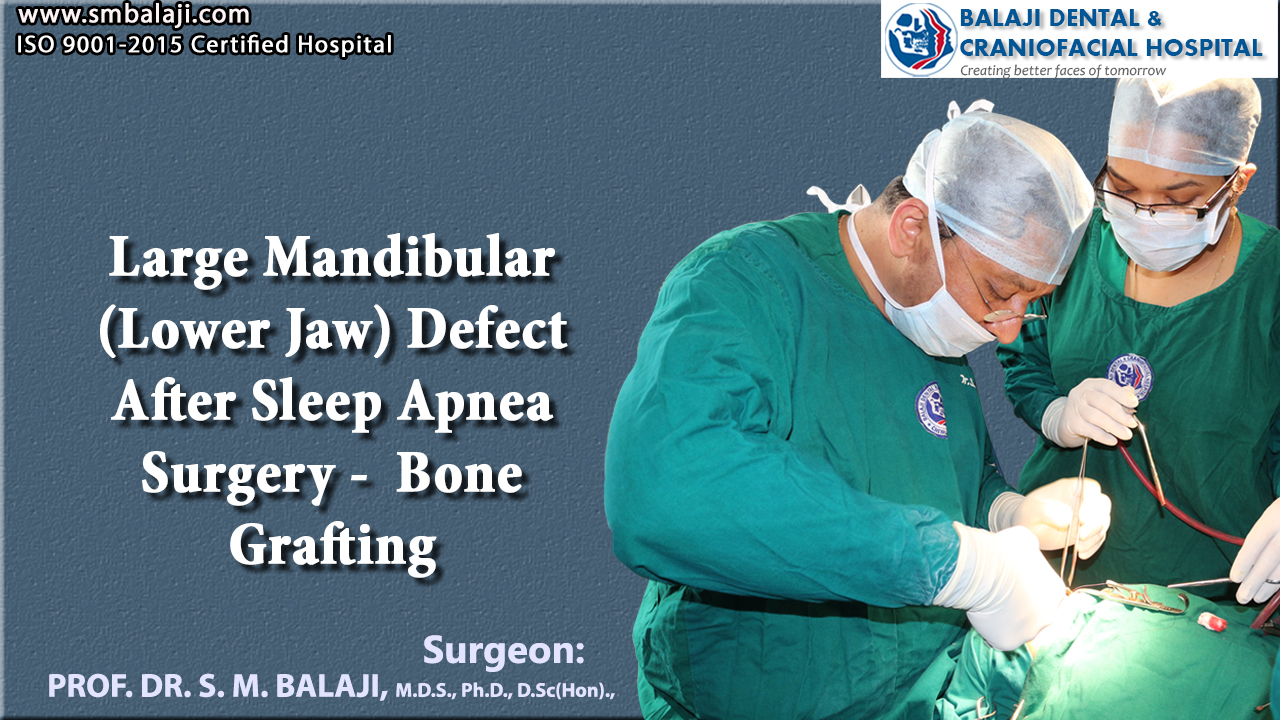 What is a cyst?

A cyst is a cavity, which has a thin wall and usually contains fluid that is present in the body. Cysts are always pathological in nature and have to be removed. When cysts are allowed to persist, they can grow to enormous sizes and cause local destruction of surrounding structures. They can also become infected and cause considerable pain. The only treatment is through surgical removal through enucleation of the entire cyst. Care has to be taken to ensure that the cyst is removed in its entirety. Even leaving behind the smallest remnant of the cyst can result in recurrence of the cyst. A few examples of cysts are ovarian cyst, sebaceous cyst, pilonidal cyst, primordial cyst and dentigerous cyst.

Cysts are more common in the lower jaw than in the upper jaw. There have been rare instances where the jaw joint has been affected by cysts. This could lead to TMJ disorders thus requiring TMJ reconstruction surgery.

Patient with a history of sleep apnea surgery

The patient is a 35-year-old male from Kolkata in West Bengal, India who had a history of sleep apnea. This had been diagnosed after a series of sleep studies performed in his hometown. He had undergone mandibular box osteotomy for correction of sleep apnea around 10 years ago. This is a form of corrective jaw surgery. He stated that his sleep apnea had reduced significantly. A postoperative sleep study had indicated that he had an improvement of about 50% of oxygen saturation during sleep.

Over the past one month, the patient had begun to notice a sharp pain in the region of his lower back teeth. There was also an associated swelling in that region. A friend suggested that this might be due to wisdom teeth problem and suggested that he visit a dentist. He had visited a dental clinic in his hometown where diagnostic studies had been obtained. There was an area of radiolucency in association with his left premolar. Suspecting that this could be cystic in nature, the dental surgeon referred the patient to our hospital as our hospital is a reputed oral and maxillofacial surgery hospital in India. We are also renowned for cyst removal surgery in India as well as jaw reconstruction surgery in India. Surgery costs are nominal in India when compared to the developed nations of the west.

Patient presents to our hospital for initial assessment of his swelling

Dr SM Balaji who is one of the premier oral and maxillofacial surgeons in India examined the patient and obtained a detailed oral history. He also went through the patient’s old surgical records. Following this, the patient underwent a complete clinical and radiological examination with a 3D CT scan. There was a small swelling in relation to the lower left premolar teeth. The 3DCT scan revealed that the patient had a cyst in left lower front teeth region. This cyst extended from the lower left canine to the lower left second premolar. There was also radiolucency noted at the site of the box osteotomy that had been previously performed for the patient’s sleep apnea.

Treatment planning for removal of the cyst and jaw reconstruction

It was explained to the patient that he needed to have his cyst enucleated followed by reconstruction of the bony defect with bone graft. The graft was planned to be harvested from the iliac crest. The patient was in complete agreement with the proposed treatment plan and signed the informed surgical consent. There would be no necessity for any facial plastic surgery for the patient.

Successful surgical enucleation of the cyst

Under general anesthesia, a crevicular incision was first made over the region of the cyst following which a flap was elevated. The area of the cystic defect in the mandible was then identified and enucleated in its entirety. Assessment of the residual bony defect was done before harvesting the bone graft from the iliac crest. A linear incision was then made over the iliac crest following which adequate bone graft material was harvested using the trapdoor technique. Closure of the incision was then done in layers

The area of the residual bony defect from the cyst enucleation was then packed with bone graft. Bone graft was also placed over the box osteotomy site to promote bone formation. Closure was then done using resorbable sutures.

All the teeth in the region were retained and no teeth were extracted during the surgery thus negating the need for any dental implants for the patient.

The patient was extremely happy with the results of the surgery. The swelling in the mandible was gone as was the pain in the region. He expressed his complete satisfaction before final discharge from the hospital.