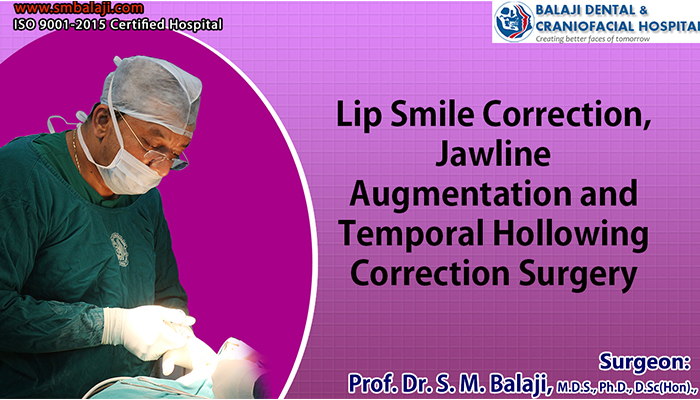 This young lady was not happy with the shape of her face. She complained that her upper lip was too long and her upper incisors were not visible when she smiled. She desired to have a shorter upper lip. Another complaint was that the sides of her face were very depressed and lacked adequate fullness. She also wanted a more prominent mandibular angle as she felt that her lower face was elongated.

The patient has undergone numerous surgeries in the past including a rhinoplasty, upper lip lift, eyebrow lift, cheek and jaw implants(Medpor) for which the mandible was shaved, advancement genioplasty, lower lip tissue deformity augmented with dermis/fat graft, Teosyal filler for dark circles and porcelain crowns. All these procedures had been performed elsewhere. She had been referred to our hospital as our hospital is renowned for facial cosmetic surgery in India.

Growth of reconstructive surgery in India

Reconstructive surgery or plastic surgery in India has undergone a boom due to medical tourism from all parts of the world. Facial plastic surgery is also performed by oral and maxillofacial surgeons in India. They had an in depth knowledge of the facial anatomy including the soft tissue and hard tissue anatomy. The incisions have to be performed in the correct tissue planes for the best surgical results. This will result in the incision scars blending in within the skin tone of the patient and becoming unnoticeable over a period of time.

Some of the surgical procedures or cosmetic procedures performed by plastic surgeons in India include fat transfers, injectable fillers for enhanced lips, cosmetic correction of congenital defects and face lifts. Hyaluronic acid is one of the fillers used for lip enhancement surgery, which is often done under local anesthesia. Care has to be taken to have the patient tested for allergic reactions and side effects before use.

Initial examination and investigations upon presentation at our hospital

Dr SM Balaji, facial cosmetic surgeon, examined the patient and had in depth discussions with the patient regarding what the patient desired from her surgery. He then ordered imaging studies including a 3D CT scan. A 3D stereolithographic model of the patient’s skull was also obtained. The patient had significant bilateral temporal hollowing. Her angle of mandible on the left side appeared to be recessed. There was no maxillary incisor show during speech and smiling. The vermillion was inadequate at the left corner of the upper lip.  He continued to conduct detailed discussions with the patient throughout this period and explained in detail about what the patient could expect from the surgery.

Treatment planning formulated after detailed discussions with the patient

Under adequate general anaesthesia, two rib grafts were obtained through a left inframammary incision following which a Valsalva manoeuvre was performed to ensure that there was no perforation into the thoracic cavity. The incision was then closed in layers with sutures.

Following this, an incision was then made in the posterior region of the left mandible followed by elevation of a flap. The left angle of mandible was then augmented using the costochondral rib graft, which was fixed in place with titanium screws. This was followed by bilateral anguloplasty for smile line correction. A bullhorn procedure was then performed next to increase the show of upper incisors during smiling and speech.

The bilateral temporal hollowing was addressed next. This was done through a bicoronal flap through a pre-existing surgical scar. There would be no visible scar formation through this approach. A frontotemporal flap was then raised. The region of the temporal hollowing was augmented bilaterally through the use of rib grafts, which were fixed using titanium plates and screws.

The outcome of the surgery was exactly as planned and the patient expressed her complete satisfaction at the final results of the surgery. She had about 3-4 mm incisal show following the bullhorn procedure and there was also increased vermillion exposure of the upper lip following the anguloplasty along with a more prominent angle of the mandible. She was very happy with the results of her cosmetic lip surgery.