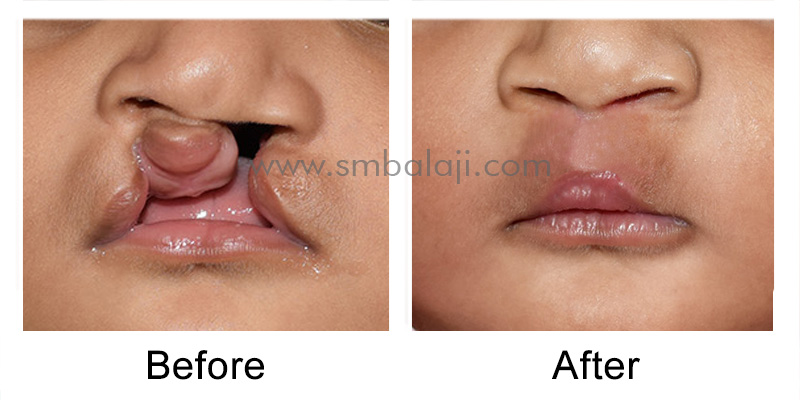 A 3-months-old baby boy from Delhi was brought to our hospital seeking treatment for cleft lip and palate. Pre-natal diagnostic scan(USG abdomen) was done and the parents were informed that their baby would be born with a cleft lip at about 3-5 months of age.

The parents were well aware that their child would be born with this condition and they started inquiring about the best center for treatment of cleft lip and palate when the baby was in the womb itself. They had searched through the internet and found our hospital to be the best center for cleft lip and palate repair. Their idea of consulting our hospital for cleft lip repair was reinforced when their family doctor also suggested them to seek treatment at Balaji Dental and Craniofacial Hospital.

The parents inquired at our hospital about their baby’s condition through a telephonic conversation for which a detailed explanation was given. The do and don’t, methods of feeding and child care were well explained. Furthermore, books on cleft lip and palate were also mailed to the patients for better understanding.

The parents were advised that the baby has to undergo surgery. They were well aware that the first surgery ( lip repair )  was to be done at 3 months of age followed by palate repair at 9 months.

The cleft lip repair surgery was done at 3 months of age using Paul Black’s technique. The suture removal was done after a period of 7 days.

The result of the surgery was successful. The baby’s appearance improved greatly. His parents were overjoyed to have the defect treated with negligible scar formation. He looked like any other boy of his age after the surgery.

The palate surgery will be done 9 months of age followed by alveolar cleft defect reconstruction at 3 and a half years of age.