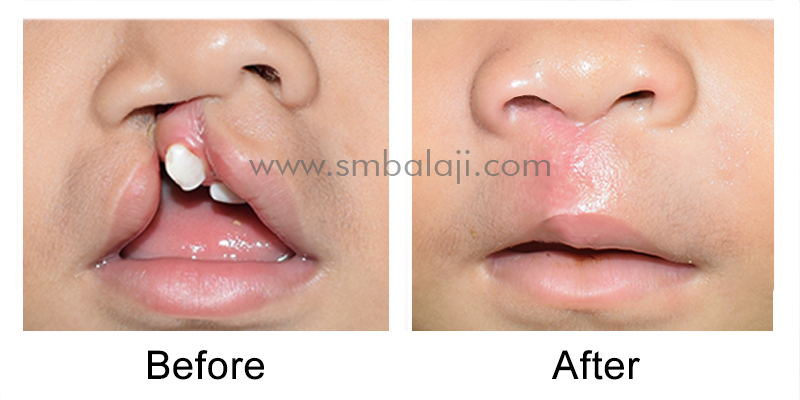 The patient is a 11 months old baby boy from Jammu who was brought to our hospital seeking treatment for cleft lip and palate. A pre-natal diagnostic scan (Ultrasound of abdomen) had been done at the end of the first trimester in his hometown. It was then that the deformity was discovered and the parents were informed that their baby would be born with a cleft lip.

The parents were aware that their child would be born with this deformity. They therefore educated themselves about this condition. However, they were not very keen on getting the surgery done for their baby until he was about 10 months of age.

They had also made widespread inquiries about the best hospital for cleft lip repair. Their inquiries led them to Balaji Dental and Craniofacial Hospital, which is a premier center for cleft lip and palate repair in India.

The parents got in touch with our hospital when the baby was about 10 months of age. Detailed explanation was given regarding the treatment. Books authored by Dr SM Balaji providing comprehensive information about cleft lip and palate deformity and repair were also mailed to the parents.

Parents brought the child to our hospital at 11 months of age. Dr SM Balaji, Cleft Repair Specialist, examined the baby. He advised the parents regarding the need for lip repair surgery.

The patient underwent cleft lip repair surgery using the modified Millard’s technique. Suture removal was done after a period of seven days. Surgery was a resounding success and the baby’s appearance was greatly improved.

His parents were overjoyed that the defect had been corrected with no visible scar formation. He looked like every other infant, gurgling and smiling spontaneously.

The patient will undergo cleft palate surgery after a period of one or two months followed by alveolar cleft defect reconstruction at 3 and a half years of age. Parents expressed understanding of the same and expressed complete satisfaction at the time of discharge from the hospital.