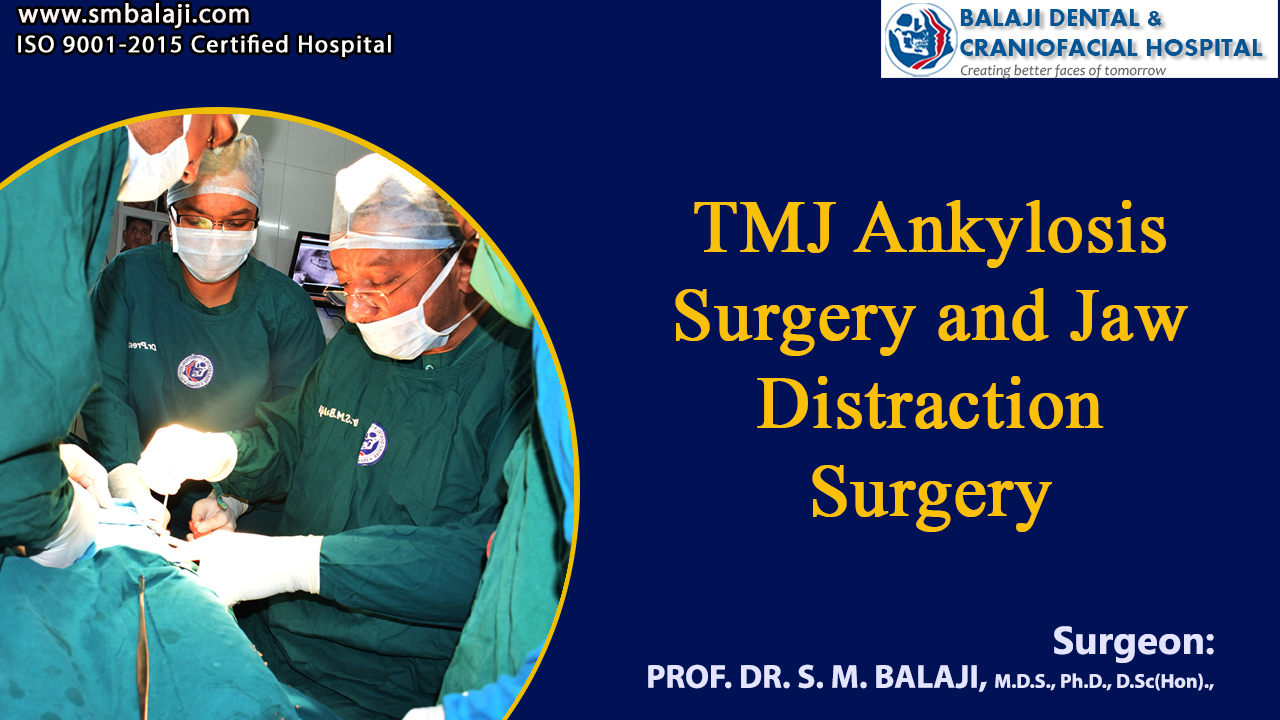 A 23-year-old girl from Guntakal with facial deformity

The patient is a 23-year-old female from Guntakal in Telangana, India. She had fallen down and injured her jaw while playing with friends as a little girl. The patient had landed on her chin and had cried incessantly for a few days.

Her parents had taken her to a nearby hospital where they had prescribed her analgesics. She soon returned to her normal playful ways once the patient had subsided.

As the patient grew up, her parents began noticing that her lower jaw growth was lagging. It soon reached the point where she had gross deformity of her lower jaw. Her mouth opening was also very much reduced and she began to have difficulty eating and with speech. There was rigidity to the position of her lower jaw.

Her parents had taken her to an oral surgeon in Hyderabad for consultation. He had diagnosed the patient to have left-sided TMJ ankylosis. There was a deviation of her mandible to the left side. He had recommended surgical release of her ankylosed joint. Her parents had consented to surgery and she had undergone TMJ ankylosis surgery.

She now had a degree of facial asymmetry that interferes with her activities of daily living. She has lost all self confidence and rarely leaves the house. This had worried her parents endlessly and they had presented to a local oral surgeon for consultation regarding her problem.

Our hospital is a specialist center for facial deformity correction in India. Hundreds of people with facial deformity are rehabilitated in our hospital through distraction osteogenesis and Le Fort osteotomy surgery. Many patient have provided testimony about how surgery at our hospital has completely transformed their lives.

Dr SM Balaji, facial deformity surgeon, met with the patient and her parents and obtained a detailed history from them. This was followed by a thorough clinical examination of the patient’s lower face. He then ordered comprehensive imaging studies for the patient including a 3D CT scan.

The patient was diagnosed with a mandibular asymmetry caused by the TMJ ankylosis. This had caused a shift of the mandible to the left side. There was also an obvious facial asymmetry as a result of this. The patient had minimal mouth opening with poor oral hygiene.

There was also an obvious occlusal cant that had resulted from the long standing ankylosis. Imaging studies revealed that the right side of the mandible was longer than the left side.

Successful correction of the facial asymmetry through distraction

Under general anesthesia, an incision was made in the left mandibular retromolar region with elevation of a mucoperiosteal flap. Bone cuts were then made to the outer cortex of the ramus of the mandible. This was followed by fixation of the mandibular ramus distractor using titanium screws.

The inner cortex of the mandible was then cut to facilitate movement of the proximal bone segment. Extreme care was taken throughout to prevent any injury to the inferior alveolar nerve.

A sulcular incision was then made in the maxilla. This was followed by Le Fort I osteotomy. The maxilla was then mobilized and the posterior end of the left maxilla was fixed using transosseous wires. Hemostasis was achieved and closure was done.

Postsurgical treatment phase for the patient

Interarch wiring was done to stabilize the maxillary segment. A latency period of about six to seven days was then given. Following completion of the latency period, the distractor was activated by 1 mm every day.

After achieving the desired increase in length of about 23 mm, the distraction process was stopped. Two weeks after this, a straight plate was fixed to the left posterior maxilla to prevent further downward movement.

There was complete correction of the occlusal cant at the end of this procedure. Radiographs were then obtained after a period of about four months. This revealed complete consolidation of bone at the distraction site in the mandible.

Radiographic evaluation revealed complete bone formation with a patent nerve canal. It was then decided to remove the distractor.

Removal of distractor after bony consolidation

Return of self confidence and confidence following successful surgery

The patient and her parents were very happy with the outcome of the surgery. She now had a very pleasant face with symmetrical profile.  Her self confidence levels had improved dramatically within a short period of time. She said that she could now face the world bravely and expressed her thankfulness for restoring normalcy back to her life.