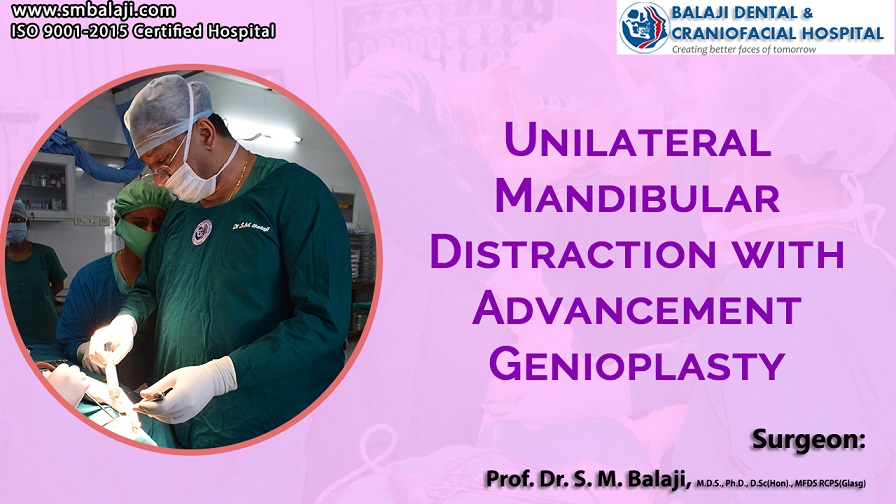 The patient is a 23-year-old female from Mallapuram in Kerala, India. She had been involved in a minor road traffic accident when she was a little girl. Her father had been riding his motorcycle with her seated in front of him. A cyclist had abruptly cut across their path, which had resulted in them skidding and falling down.

There were only minor bruises and scrapes resulting from the accident. She had complained of a mild pain on the left side of her face upon opening her mouth. This had however soon resolved. The patient and parents had completely forgotten about it and had got on with their lives.

Her parents gradually began noticing the development of a mild deviation of her lower jaw to the left. This progressively worsened until it became evident to even a casual observer. Worried about this development, her parents fixed an appointment with an oral and maxillofacial surgeon in a nearby city.

The surgeon examined the patient and obtained imaging studies of her temporomandibular joint. This revealed that there was ankylosis of the patient’s left jaw joint. He explained to them that this was most probably caused by an injury to the joint at the time of the accident.

Feeling despondent over these developments, they sought the advice of a family friend who was a medical professional. She made thorough enquiries regarding hospitals where the patient’s condition would be adequately treated. Deciding that our hospital met all the criteria listed by her, she referred them to us for surgical management.

Facial plastic or cosmetic surgery is routinely performed in our hospital. Distraction devices are used for gradually lengthening the bone through osteogenesis of the mandible. Mouth opening is enhanced through this procedure. Upper airway obstruction due to small lower jaw is also relieved through distraction. Cleft palate surgery is a superspecialty feature of our hospital.

Initial presentation at Balaji Dental and Craniofacial Hospital for consultation

The patient was informed her altered taste sensation was from facial nerve damage. This had been caused by her previous surgery. He advised that the patient undergo left TMJ gap arthroplasty with interpositioning of temporalis muscle.

This would be followed six months later by unilateral mandibular distraction and Le Fort I surgery. He also advised advancement genioplasty for overall good cosmetic results. The patient and her parents consented to the treatment plan and the patient had successful release of her joint ankylosis. They now present for the second stage of surgery.

Patient and her parents present for second stage of surgical correction

Dr SM Balaji, facial asymmetry correction surgeon, examined the patient and there was good movement of her previously ankylosed left temporomandibular joint. It was then decided to proceed with the next step of surgery. There would be correction of the mandibular asymmetry and the skewed occlusal cant following this surgery.

A left mandibular vestibular incision was first made following which a bone cut was made to the ramus. Mandibular distraction osteogenesis was then made with good demonstration of distraction upon activation of the device.

Interdigitation of the occlusal plane with good facial asymmetry

Attention was next turned to the Le Fort I osteotomy of the maxilla. The maxillary segment was disjointed. This was followed by advancement genioplasty, which gave the patient an esthetically pleasing chin. Transosseous wiring was then performed to fix the maxilla on the right side.

This was followed by intermaxillary fixation of the jaws. A latency period of five days will be allowed following which distraction will be initiated. It was planned to perform a total of 12 mm of mandibular distraction over a period of 12 days. The distractor will be left in place for four months for good bony consolidation at the site of distraction.

Complete patient and parental satisfaction at the results of the surgery

There was good establishment of facial asymmetry after completion of the distraction. The patient and her parents expressed their complete satisfaction with the results of the surgery. They expressed understanding of the instructions and will return in four months for distractor removal surgery.