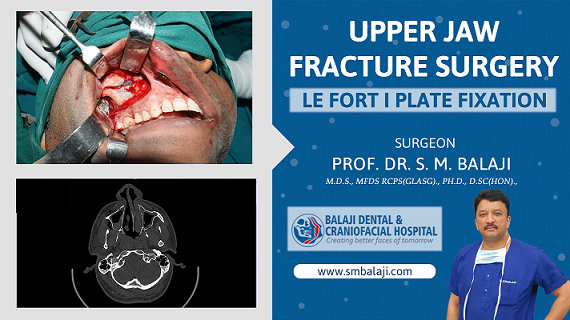 The patient is a 22-year-old male from Chennai in Tamil Nadu, India. He was relaxing at home on a weekend after completing his examinations. Walking into the balcony of his house in the dark, he had tripped on his dog. The fall had resulted in a direct impact to his midfacial region from a cushioned wooden swing.

He had felt an excruciating pain immediately upon impact and had cried out loudly. Hearing his cry, his parents had rushed to him. There was bleeding from inside his mouth and he appeared dazed from the impact.

They rushed him immediately to a nearby dental clinic. An intraoral examination had revealed a mobile maxillary bone along with a laceration near the maxillary labial frenum.

Patient brought to our hospital for management of his maxillary fracture

Dr SM Balaji, jaw fracture specialist, examined the patient and ordered imaging studies including a 3D CT scan. Examination revealed that the entire maxillary segment was mobile. There was the complete horizontal separation of the maxilla from the skull. Horizontal maxillary fractures are also known as the floating palate.

There was no involvement of the orbital wall or the inferior orbital rim. The Zygomatic arches were also intact. There was no other facial injury other than the broken jaw and labial laceration. Oral surgeons in India are the primary surgeons for this injury.

Under general anesthesia, the maxilla was examined and demonstrated crepitus with movement. A right maxillary lateral vestibular incision was made. Dissection was made down to the region of the fracture.

The fracture segments were stabilized and occlusion was checked. This was then fixed with two four-holed L-shaped titanium plates and screws.

Attention was next turned to the left side where two four-holed straight titanium plates were used to stabilize the fracture. Occlusion was checked again and found to be intact. All incisions were then closed with sutures. The patient was then extubated and taken to recovery in stable condition.

The patient made a full recovery and returned to normal life. He said that there was no change in his facial appearance and no pain. His parents were extremely relieved that he had made a complete recovery from his jaw fracture. They expressed their thankfulness to the surgical team for their son’s recovery.