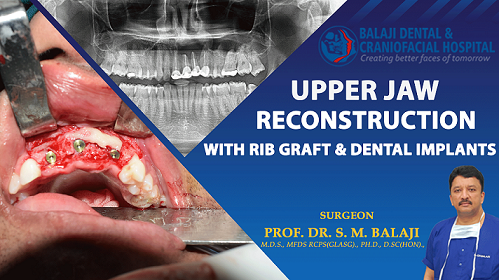 The patient is a 28-year-old male from Pune in Maharashtra, India. He is an entrepreneur with his own startup company. Around 12 years ago, he had been injured while playing hockey in school. This had resulted in the fracture of his maxillary central incisors, left lateral incisor and left canine.

Multiple apicoectomy procedures had been performed over the years for the involved teeth. This had however not provided long term resolution of his symptoms. His teeth had also become mobile due to bone loss from recurrent infections to the area.

The patient had visited a dental clinic where imaging studies had been obtained. The dental professional had also conducted a thorough intraoral examination.

This had revealed highly mobile teeth along with extensive alveolar bone loss and gum disease. Periodontal ligament attachment had been destroyed. There was also a periapical cyst in relation to the affected region.

The patient had subsequently researched our hospital over the Internet. He made further enquiries using his professional contacts in Chennai. Having finally satisfied himself about the quality of services, he had contacted our hospital manager and made an appointment.

Dr SM Balaji, bone graft dental implant specialist, examined the patient and obtained imaging studies. This revealed that the patient had root canal treated upper central incisors and left lateral incisor and canine. There was extensive alveolar bone resorption of the involved area. This had resulted in grade 2 anterior mobility of the involved teeth.

It was explained to the patient that it was just a matter of time before the teeth were lost. He was advised upper jaw reconstruction with bone grafts. This would be followed by fixing of implants to the rib grafts. Final step of rehabilitation would involve fabrication of a bridge to replace the missing anterior teeth.

This was explained to the patient in detail and he consented to undergo surgery.

Under general anesthesia, a mucogingivoperiosteal flap was first raised over the region of the involved teeth. The four involved teeth were extracted and the cystic lesion was removed in its entirety. Friable infected bony tissue was then removed with a bur.

The bone graft was then crafted to fit perfectly into the region of bony defect in the anterior maxillary region. This was then fixed in position with titanium screws. The patient was instructed to return in four months for fixation of implants in the bone grafts.

It would take a period of four months for complete bony consolidation of the grafts with the surrounding alveolar bone.

He reported back as instructed after osseointegration of the implants to the alveolar bone. A Ceramic bridge was then fabricated to complete the rehabilitation process for the patient.

The patient was very satisfied with the results of his treatment. He said that he could not even differentiate between his natural teeth and the ceramic bridge. The patient thanked the entire team before final discharge from the hospital.