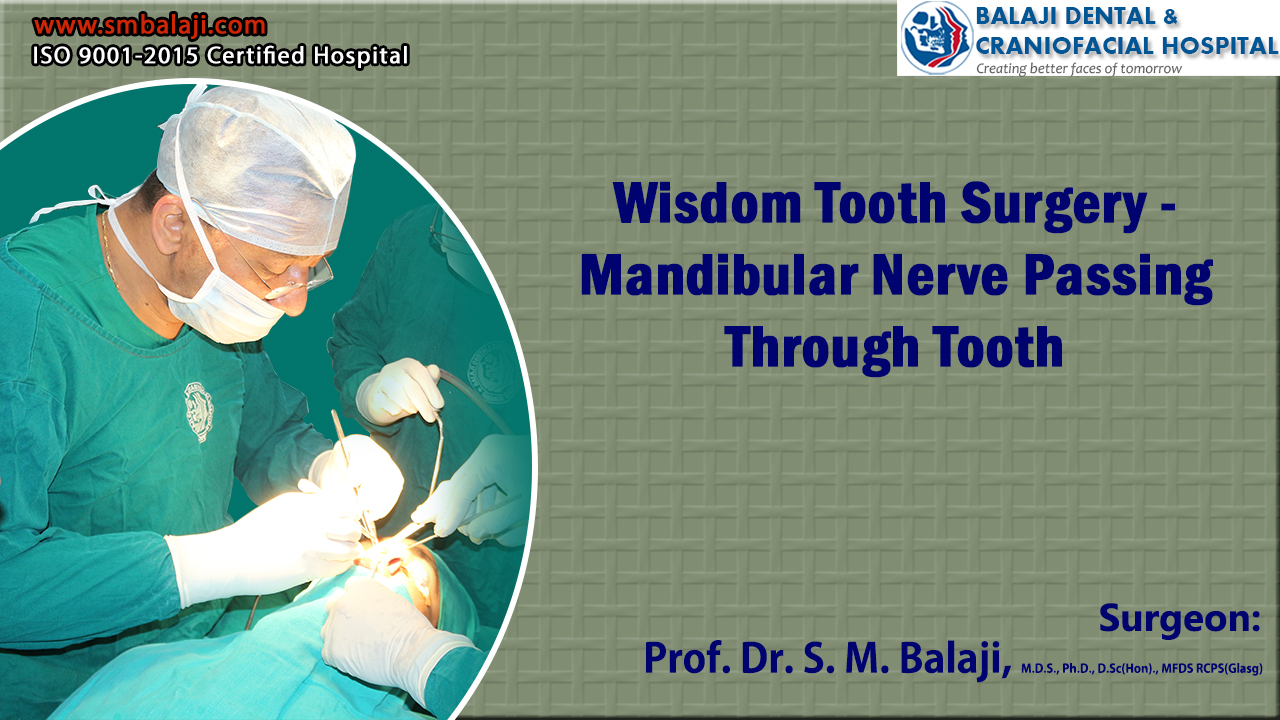 Patient with pain and swelling in the posterior left mandible

The patient is a 25-year-old female from Kumbakonam in Tamil Nadu, India. She had developed severe pain and swelling on the left side of her mandible. The patient had a grossly decayed left third molar. There was also severe trismus with limited mouth opening due to the presence of the infected tooth.

The patient had presented at a nearby dental clinic for management of her problem. An OPG had been obtained, which revealed bilaterally impacted mandibular third molars. The left third molar was grossly infected. The right third molar was completely submerged within bone and the inferior alveolar nerve was passing through the tooth.

Upon viewing this, the doctor had realized that this was a complicated extraction that needed to be performed by an experienced oral and maxillofacial surgeon. He had subsequently referred the patient to our hospital for extraction of her impacted mandibular molars.

Our hospital is a specialty center for complicated extractions. Molar impactions present at the lower border of the mandible are addressed here. Simultaneous extractions of bilaterally impacted maxillary and mandibular molars are routinely operated in our hospital.

Our hospital is also renowned for complex craniofacial surgery in India along with facial trauma surgery and facial cosmetic surgery. It has been widely decorated by many acclaimed international organizations.

Initial presentation at our hospital for management of her problem

Dr SM Balaji, jaw reconstruction surgeon, examined the patient and obtained a detail history. He also ordered 3D CT scan and other pertinent imaging studies. The patient stated that she had severe pain and swelling in left mandibular molar region for one week.

The 3D CT scan revealed bilaterally impacted lower third molars. The left molar was grossly decayed. The inferior alveolar nerve which provides sensation to the lower lip was passing through the root of the impacted right third molar.

A flap was first raised on the left side and bone was reduced around the carious third molar tooth. This was followed by transalveolar extraction of the grossly decayed tooth.

Bone was reduced to expose the submerged right third molar tooth. The tooth was then sectioned taking great care to ensure there was no damage to the inferior alveolar nerve.

The sectioned parts of the tooth were then carefully extracted to prevent any damage to the nerve. The flap was then sutured using resorbable sutures.

Complete patient satisfaction with resolution of pain and swelling

Nerve function tests were performed and all nerve functions were fully intact. The patient was very happy that a potentially complicated problem had been solved with such ease. She did not experience any numbness and had no postoperative complications following the removal of her third molars.