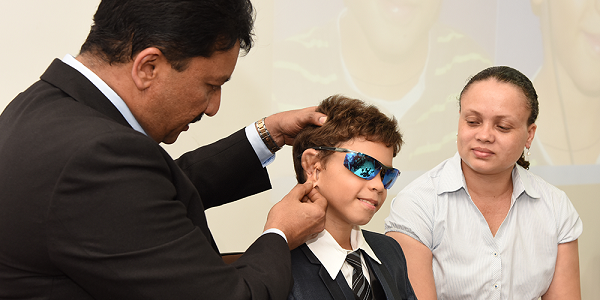 9-year-old Nathan Parkash from Seychelles was born with completely absent external portion of his right ear, he only had a very small, rudimentary ear lobule. His left ear was normal. Doctors in his hometown diagnosed that the child’s hearing was normal. As the boy started going to school, his social interactions increased, children at school began teasing him because of his ear. He suffered ridicule and unwelcome stares. He saw that he was not able to wear sunglasses and walkmans like his fellow mates. He started becoming psychologically depressed about his appearance. Slowly he became withdrawn and self-conscious. His parents were becoming increasingly worried for their child’s poor self-esteem. They looked for hospitals that do ear reconstructions all around the world and they found that such centers are very few and the results were not up-to the mark. Usually people from Seychelles go to South Africa or Dubai for medical treatment. They found that very few hospitals were available for doing such procedures but the outcomes were not satisfactory.

The Govt. of Seychelles referred them to our hospital for the ear reconstruction surgery (Microtia) as they found the surgical results of the surgeon to be exceptionally best in India. Dr. S.M. Balaji decided to perform complete ear reconstruction in 2 stages using the boy’s own rib graft (costochondral graft) as artificial materials can lead to inherent problems like infection, allergy and loss of stability over time. Using the patient’s own graft is the best technique giving permanent and stable results.

The first stage was called cartilage-banking surgery. Based on the measurements of the normal left ear, a template was made. It was important to do this correctly as the ear characteristics have to be accurately replicated to achieve symmetry. A costochondral graft was taken from the rib. Using the template as reference, the graft was contoured to create the structural framework. This is most crucial and has to be done with great precision and accuracy. The skin of the right ear was raised creating a pocket and the cartilage framework was placed below the skin. Additional piece of cartilage was also placed adjacent for future use. A surgical drain was placed that created a suction making the overlying skin to adapt to the framework and the ear shape was achieved

After 3 months the second stage surgery called ear-lifting surgery was done. Using the excess preserved cartilage and skin graft, the entire ear framework was lifted from the side of the head giving a normal, raised appearance to the ear. Following reconstruction the ear was given a more aesthetic, natural-looking appearance. As the boy grows the normal left ear will grow, but the reconstructed right ear will not increase in size. So to avoid re-surgery, the right ear was reconstructed with a higher dimension matching the adult size.

Following second stage surgery the boy is delighted about his “new ear”. Also he is happy that he won’t be teased any longer. He and his parents are happy with the surgery outcome and returned to their hometown. He may require revision surgery at later stage. Ear reconstruction surgeries are challenging and must be performed with skill, care & artistic sense. Timely correction of ear defects is important for the person’s physical and emotional well-being. 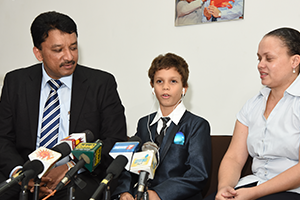 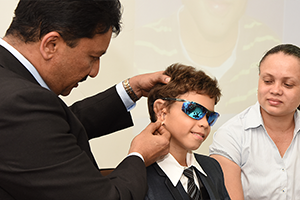 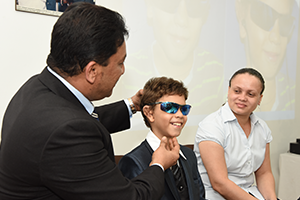