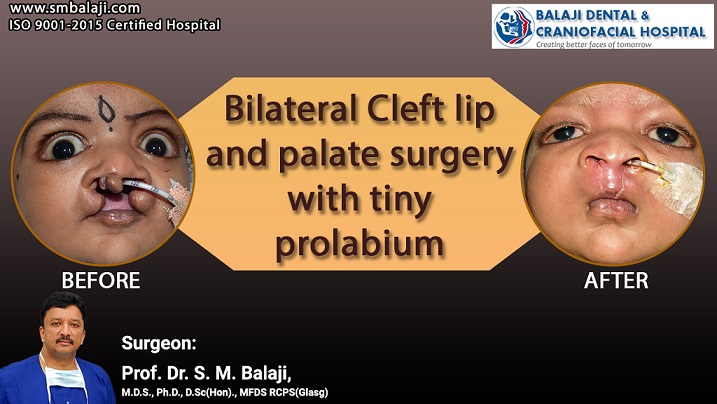 Occurrence and Etiology of Cleft Lip and Palate Deformity

These defects are found in Pierre Robin sequence, Stickler syndrome and Treacher Collins syndrome amongst others. Other factors can also lead to the intrauterine development of the cleft lip and palate deformity. They include maternal smoking, secondhand smoke, diabetes, obesity and advanced maternal age.

Usage of contraindicated medications during pregnancy can also lead to this deformity. Maternal use of seizure medications is a common cause of this defect.

Ongoing Research regarding the Role of Modern Technology and Congenital Defects

Modern technology has brought a whole new range of factors into play. These too need to be considered as an etiology for the development of cleft lip and palate. Research is still underway regarding the role of radiation emitted by modern devices in the development of this deformity.

A cleft lip is nonfusion of the two halves of the upper lip. This can either be unilateral or bilateral in presentation. There is gross facial deformity arising from this condition. Children with cleft lip deformity can develop psychological problems in later life if the condition is left unaddressed.

This deformity results in both cosmetic as well as a functional compromise for the affected infant. Surgical repair is the only treatment option. Children might need a few additional surgical procedures as they grew up.

Cleft palate deformity is caused by nonfusion of the two halves of the palate. This results in a hole in the roof of the mouth. Feeding difficulties arise from this as the infant is not able to create the vacuum needed for suckling. There is a regurgitation of fluids into the nasal cavity.

Dr. SM Balaji is regarded as the best cleft lip surgeon in Chennai, India. He has been credited with numerous surgical innovations in cleft lip and palate surgery. These innovations have become a standard surgical practice in hospitals around the world. His services as much sought after by many nations around the globe. They include the USA, Germany, Japan, Sri Lanka, and the Maldives amongst many others.

International Acclaim for the Surgical Services in our Hospital

Our hospital is the tertiary referral center for the International Cleft Lip and Palate Foundation (ICPF) of Japan. We have also been chosen as the Asian referral center of the Dallas-based World Craniofacial Foundation (WorldCF) of the USA. Children from around the world are referred to us due to the high level of surgical care for afflicted infants.

We are often feted as the best cleft lip surgery hospital in Chennai by our peers. We have one of the best cleft teams in the world today. Speech therapists are also an intrinsic part of this team. We understand the needs of children with cleft deformities.

Numerous awards including the prestigious Dr. BC Roy award stand testament to the levels of surgical care provided by our hospital. We are also synonymously considered to be the best cleft palate surgery hospital in Chennai, India.

Complications Caused by Delay in Getting Surgical Treatment

Speech impediment is commonly caused by this disorder if there is a delay in getting this addressed. It is imperative to get these defects corrected surgically at the right time. Speech develops normally in children who have been operated on at the right time. The ideal time for cleft lip surgery is 3-12 months and cleft palate surgery is at 10 months old.

Children who have undergone surgical repair of cleft lip and palate can require cleft speech therapy. This will ensure that there is completely normal speech, which will help the child integrate completely into society. We provide guidance to parents regarding referral for cleft speech therapy for their children.

This little boy is from Thiruvarur in Tamil Nadu, India. He was born with a severe bilateral cleft lip and palate deformity with a tiny prolabium. His parents were initially very upset by this. Staff members at the hospital counseled his parents extensively regarding his care.

Dr. SM Balaji, cleft lip and palate surgeon, met with the parents. He listened to them patiently and answered all their questions. Speaking from his vast experience, he explained to them that they had nothing to fear from this condition. They were very relieved and happy following their interaction with him.

Treatment planning was explained to his parents in detail and they consented to surgery. It was decided to perform a single-stage cleft lip repair surgery utilizing Paul Black’s technique. Considering the size of the tiny prolabium, no cross incision was made at the prolabium.

The available prolabium and columella were then mobilized for the reconstruction of his philtral column and formation of Cupid’s bow.

This was then followed by meticulous reconstruction of his nasal floor and vermillion using bilateral C-flaps. This was followed by a meticulous three-layer closure of the cleft lip using a surgical loupe for magnification. The orbicularis oris muscle was next approximated followed by an approximation of the subcutaneous tissue and skin.

Parents were very happy with the results of the surgery. They were then instructed that they needed to return when he was 10 months old for cleft palate repair. They expressed understanding and thanked the hospital staff before discharge from the hospital.