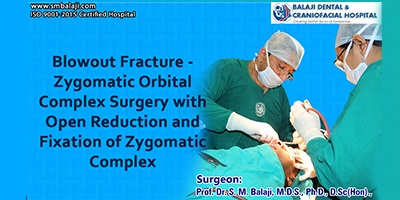 This middle aged man met with a road traffic accident with impact to the left side of his face. He had severe pain and swelling on the left side of his face and was rushed to Balaji Dental and Craniofacial Hospital, Teynampet, Chennai by his family after first aid had been administered elsewhere. Dr. S. M. Balaji examined the patient and ordered a CT scan, which showed a comminuted fracture of his left cheekbone (zygoma) and fracture of the floor of the left orbital bone.

The patient was taken to the operating room and the fracture of the zygomatic complex was approached through a vestibular incision placed in the maxillary buccal sulcus on the left side. A flap was raised and the fracture fragments were carefully stabilized and fixed using plates and screws. The fracture of the floor of the left orbit was next accessed through a transconjunctival approach. The herniated fat and orbital contents were elevated and the titanium mesh that had been adapted to the contours of the floor of the orbit was placed over the fracture site to stabilize it. The mesh was then anchored to the orbital margin using screws. The surgical sites were then closed with sutures. The patient recovered from general anesthesia without complications and was taken to his room in stable condition.