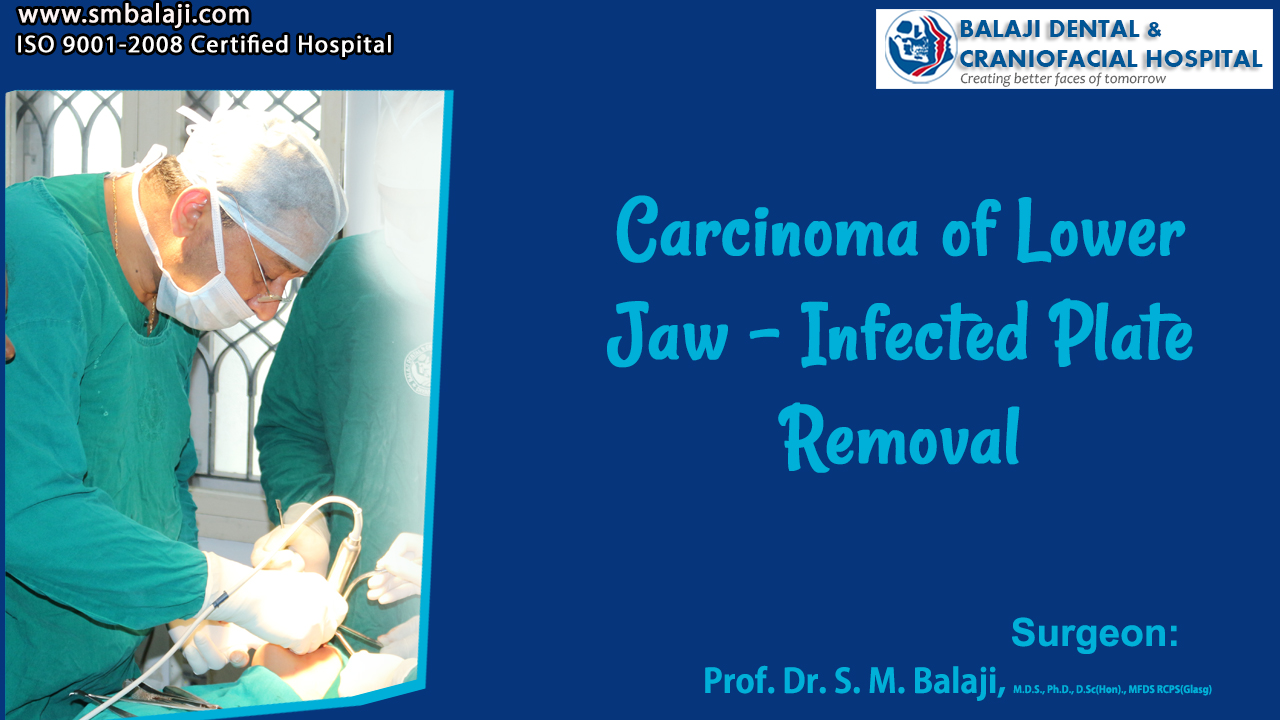 The patient is a 56-year-old male from Alwar in Rajasthan, India. He had been diagnosed with right mandibular carcinoma and had undergone a hemimandibulectomy at a nearby city. The missing section of his mandible had been reconstructed with a fibular graft and reconstruction plate with condylar head. This had been approximately two years ago.

He had subsequently undergone chemotherapy and radiotherapy with complete resolution of his cancer. The patient had had difficulty with eating and speech following surgery. There was also facial asymmetry following surgery. The reconstruction plate however became exposed around six months following the resection.

Gradually worsening over time, this had become an exposed wound with drainage of pus. The patient was greatly distressed by this. This had reached the point where it had become intolerable to the patient. He had been in constant pain because of this.

His family had made widespread enquiries regarding the best hospital for jaw surgery in India. They had subsequently been referred to our hospital for management.

Dr SM Balaji, jaw reconstruction surgeon, examined the patient and ordered for radiological studies. Clinical examination revealed that the patient had an exposed plate in relation to the right mandible. There was also drainage of pus from the site.

The patient also had associated inflammation at the site of the exposed plate. There was also trismus with inability to fully open the mouth.

The 3D CT scan revealed significant signs of infection at the site of the plate and screws. A PET scan was also obtained and was completely negative for metastasis. The patient stated that he wanted immediate removal of the plate because of the extreme level of discomfort associated with it. Decision was therefore made to remove the infected plate as per the patient’s request.

Artificial teeth or replacement teeth would be placed on the dental implants. Removable dentures are never opted for by patients nowadays.  Meticulous planning of the surgery is done to avoid complications like open bite.

General anesthesia was induced through bronchoscopic intubation due to difficulty opening his mouth. Once the patient was anesthetized, a linear incision was placed over the exposed plate extraorally. Dissection was done up to the condylar prosthesis. The infected mandibular reconstruction plate and screws were removed along with the condylar head.

Infected bone was then thoroughly debrided until healthy bone was exposed. The soft tissues surrounding the region were also cleared of infected tissue. The wound edges were then approximated and closed with sutures.

The surgery was successful and there were no postoperative complications. The patient was very happy with the outcome of the surgery. He and his family expressed understanding that this was the first step towards total rehabilitation of his oral tissues. They said that they would return in three to four months for jaw reconstruction.