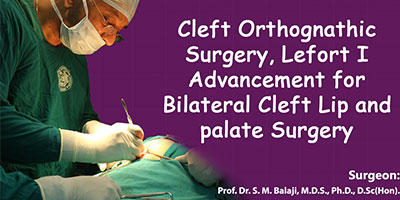 Young Nepali girl with extreme crossbite of the jaws

This teenage girl from Kathmandu, Nepal was born with a bilateral cleft lip and palate. Her parents brought her to our hospital for correction of her deformities. She had undergone cleft lip repair at two months of age and cleft palate surgery at 10 months of age. She had surgery with rhBMP-2 for repair of her cleft alveolar bone at 4-1/2 years. This was to repair and unite the maxilla, which was in three segments. She had developed an anterior crossbite due to deficient growth of the maxilla. As a result, she has had difficulty with eating and speech all her life because of her crossbite. Her parents decided to get her problem corrected through surgery. They then brought her back again to our hospital for correction of her problem.

Prof SM Balaji, Cranio-maxillofacial surgeon, examined the patient. The patient was very familiar to him as he was her surgeon since her infancy. He ordered a 3D axial CT scan and other pertinent studies. Once he had decided on the treatment plan, he explained it to the parents and the patient. They were in complete agreement with his plan of treatment.

Surgical correction of the patient’s crossbite

A maxillary vestibular incision was first made after induction of general anesthesia. A maxillary osteotomy was then performed. The osteotomized maxilla was then advanced forwards to correct the anterior crossbite. This was done utilizing two plates on each side with four screws per plate. It was for stabilizing the maxillary bone during the healing period. The bite was then checked and there was complete correction of the crossbite. Incisions were then closed with sutures.

The patient expressed complete satisfaction with the results of the surgery.