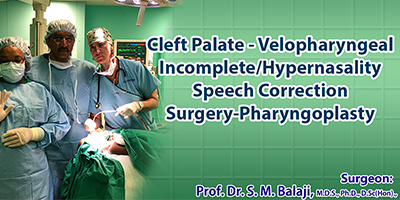 A patient with velopharyngeal insufficiency presents to Dr SM Balaji

Surgery planned for the patient

Dr SM Balaji, Cranio-Maxillofacial Surgeon, examined her. He explained to her that she needed a pharyngoplasty surgery to correct this. The patient was in agreement with this and was then scheduled for surgery. Aim of this surgery is to create a dynamic sphincter in the pharynx. Repositioning of the palatopharyngeus muscles achieves this.

The patient was then taken to the operating room. She then underwent general anesthesia without complications. Incisions were then made to release the posterior faucial pillars. This included the palatopharyngeus muscles. These muscles were then crisscrossed and sutured together on the posterior pharyngeal wall. A sphincter was thus formed here. This left a small opening or “port” for breathing through the nose.

A positive suction test was then performed after completion of the surgery. This demonstrated a new dynamic velopharyngeal sphincter action. Correction of the patient’s velopharyngeal incompetence was thus completed.

The patient expressed total satisfaction with the results of the surgery. She was then discharged from the hospital.