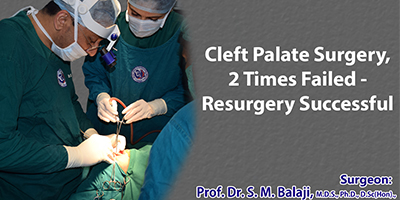 Dr. SM Balaji is a world renowned expert on cleft lip and palate surgical correction. He has over 30 years of experience operating on cleft cases. Many cases of cleft repair done elsewhere, which have failed are often referred to him. His many innovations to existing cleft surgical procedures have to lead to better results. These have become standard operating protocols worldwide.

This is a case of a young boy who had undergone cleft surgeries twice elsewhere. Both surgeries had not resulted in closure of the cleft. This had been a cause of anguish to his parents as his food intake was very impaired by the cleft. They had been searching for a long time for a cleft surgeon who could repair their son’s cleft. This search for the best cleft surgeon led them to Dr. SM Balaji.

The treatment plan explained in detail to parents

The patient was first examined and the treatment plan was explained to the parents. The parents agreed to the surgery.

General anesthesia was first administered. The Veau-Wardill-Kilner palatal pushback technique and Orticochea pharyngoplasty were then performed. This resulted in complete closure of the cleft defect. A positive suction test was then demonstrated at the end of the surgery. This would ensure proper speech for the patient.

The patient’s parents presented to Dr SM Balaji six months post-surgery for a checkup. The cleft remained closed and the patient’s speech was much improved. His parents expressed their extreme gratitude.