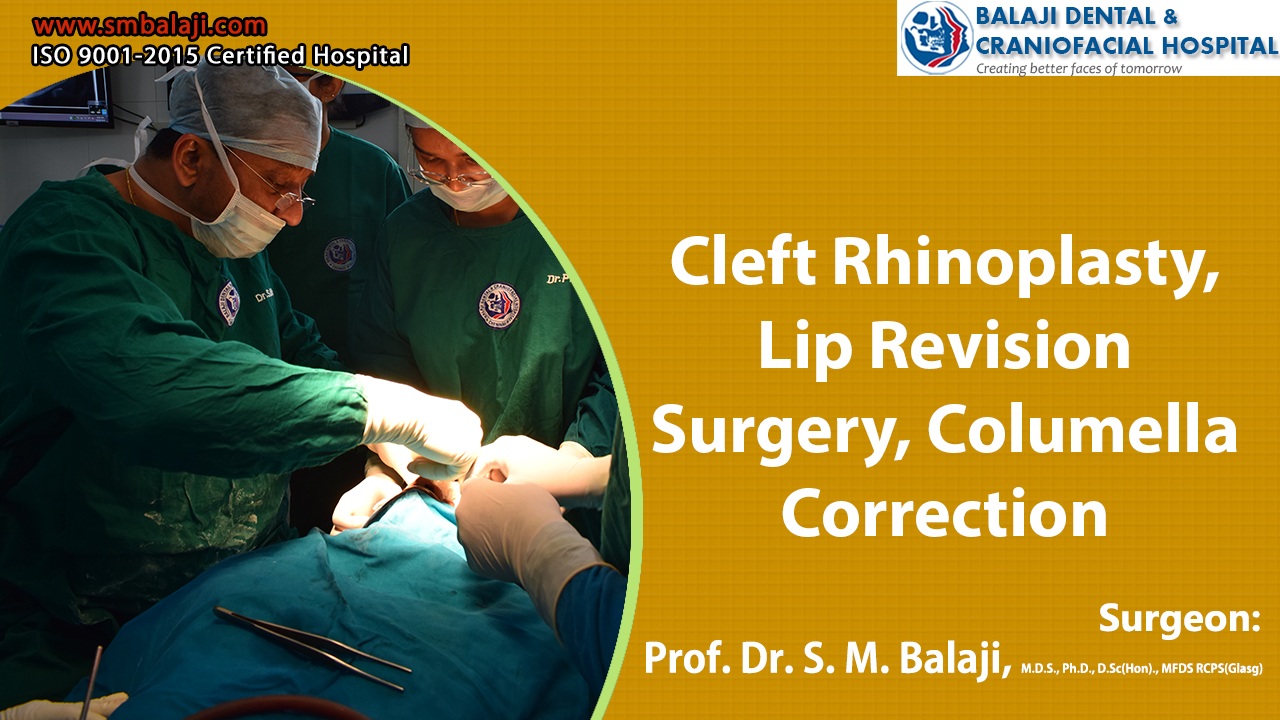 The patient is a 22-year-old male from Kasargod in Kerala, India. He had been born with a cleft lip, palate and alveolus deformity. Surgical repair of his deformities had been performed at the correct prescribed times at a local hospital. The patient had subsequently developed normally with good speech and nutrition.

However, there had always been residual facial and nasal deformity from the surgery. This had led to a degree of bullying during his schooling. As the patient grew older, the amount of nasal deformity had gradually increased.  Nasal deformities usually involve both bone and cartilage.

There was also some hypertrophic scarring at the site of the lip correction. About two years ago, the patient and his parents had visited a nearby city for consultation regarding corrective surgery. This is one of the treatments that would be addressed by a cosmetic surgeon in India. Facial plastic surgery will correct this esthetic shortcoming.

Upon viewing the patient’s deformity, the surgeon had recommended rhinoplasty with costochondral graft placement. The patient and his parents consented and surgery was performed; however, they were highly dissatisfied with the results of the surgery. The lip scarring had worsened and he had also developed breathing problems after the surgery.

His breathing problems worsened considerably to the point where they visited a cosmetic surgeon in their hometown. After examining the patient, the surgeon realized that he needed to be operated at a specialty center. He had therefore referred him to our hospital for correction of his complaints.

Initial presentation at our hospital for corrective surgery

Dr SM Balaji, Cleft Rhinoplasty Surgeon, examined the patient and obtained a detail history. The patient complained of a depressed nose. He also said that he had developed breathing difficulties after his first surgery.

The patient stated that the scar on his lip had also worsened after the previous surgery. He said that he desired to surgically have his nose and lip scar addressed.

Treatment planning was explained in detail to the family. This would first involve harvesting a costochondral graft from the patient. This would be followed by lip scar revision with correction of vermillion notching and rhinoplasty correction.

A strut graft would be used to correct the columellar deformity. The patient and his parents were in complete agreement with the treatment plan and consented to surgery.

Various nasal shapes and deformities of the nose

Some birth defects such as Down’s syndrome manifest a small nose with a flattened nasal bridge. This can be due to the absence of one or both nasal bones, shortened nasal bones or unfused bones in the midline.

Under general anesthesia, the previous surgical scar in the right inframammary region was excised. A costochondral graft was then harvested. The lip scar was excised and lip revision was done. The notching on the vermillion was also corrected.

This was followed by a transcartilagenous incision to the right and left nostril. A strut graft was placed to elevate the columella. Closure of the incision was done intranasally using resorbable sutures.

The patient and his parents were very pleased with the surgery. He now had a symmetrical and prominent nose. There was also establishment of a perfect Cupid’s bow lip form. He said that he could now face social situations with complete confidence.