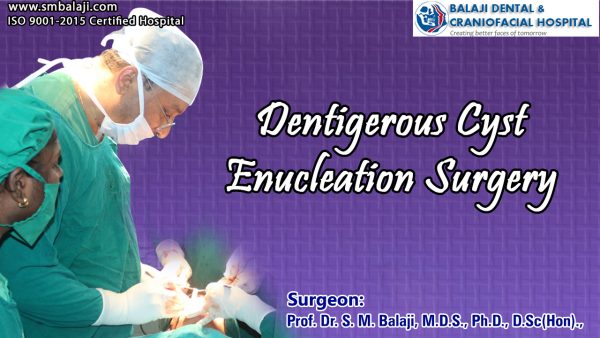 This teenage boy had been complaining of pain on the left side of his lower jaw for a few days now. There were a few teeth missing on that side. He was brought to Balaji Dental and Craniofacial Hospital, Teynampet, Chennai, by his parents for treatment. Dr. Balaji examined the patient and ordered diagnostic studies including an OPG, which revealed multiple unerupted impacted teeth and a radiolucent area in relation to the lower left first molar. A 3D axial CT scan was ordered and the diagnosis of a dentigerous cyst was made. It was explained to the patient and his parents that this had to be managed surgically and they were in full agreement with that.

The patient was taken to the operating room and general anesthesia was induced. A mucogingival flap was raised and reflected down to the sulcus. The dentigerous cyst was enucleated in its entirely and two unerupted teeth within the cyst were removed. The flap was then sutured and the patient recovered uneventfully from general anesthesia.