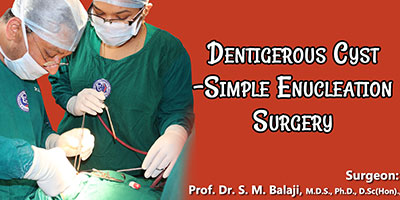 Boy with swelling referred to our hospital for treatment

The patient is a little boy from Vadodara. He had complained of a swelling in his left jaw. His parents took him to a local dentist. The dentist suspected this to be a dentigerous cyst. He then referred them to our hospital for management.

Dr SM Balaji examined the patient and ordered a 3D CT. This revealed a dentigerous cyst with an impacted second molar within it. He advised surgical removal of the cyst and the parents agreed.

Dentigerous cyst enucleated without any complications

Under general anesthesia, a mucogingivoperiosteal flap was first raised. This exposed the bony swelling enclosing the dentigerous cyst. The cyst was then enucleated and removed. Following this, the flap was then sutured back into position. The patient recovered without event from the surgery