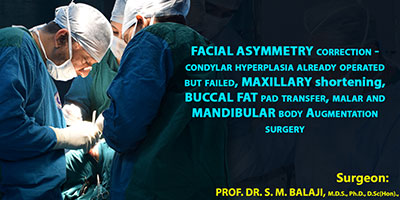 The patient is a young woman with failed condylar hyperplasia surgery performed elsewhere. She presented to our hospital for correctional surgery. Dr SM Balaji examined the patient and ordered detailed studies for the patient.

Under general anesthesia, a rib graft was first harvested from the patient. Valsalva maneuver demonstrated a patent thoracic cavity. The incision was then closed with sutures. This was next followed by harvesting of a buccal fat pad graft from the right cheek.

Augmentation of the mandibular body done with grafts

Attention was next turned to the anterior maxillary region. An osteotomy was then performed and the maxilla repositioned with four holed plates. This was then followed by transfer of the buccal fat pad graft to the left cheek. All incisions were then closed with sutures.

The patient expressed complete satisfaction with the results of the surgery before discharge.