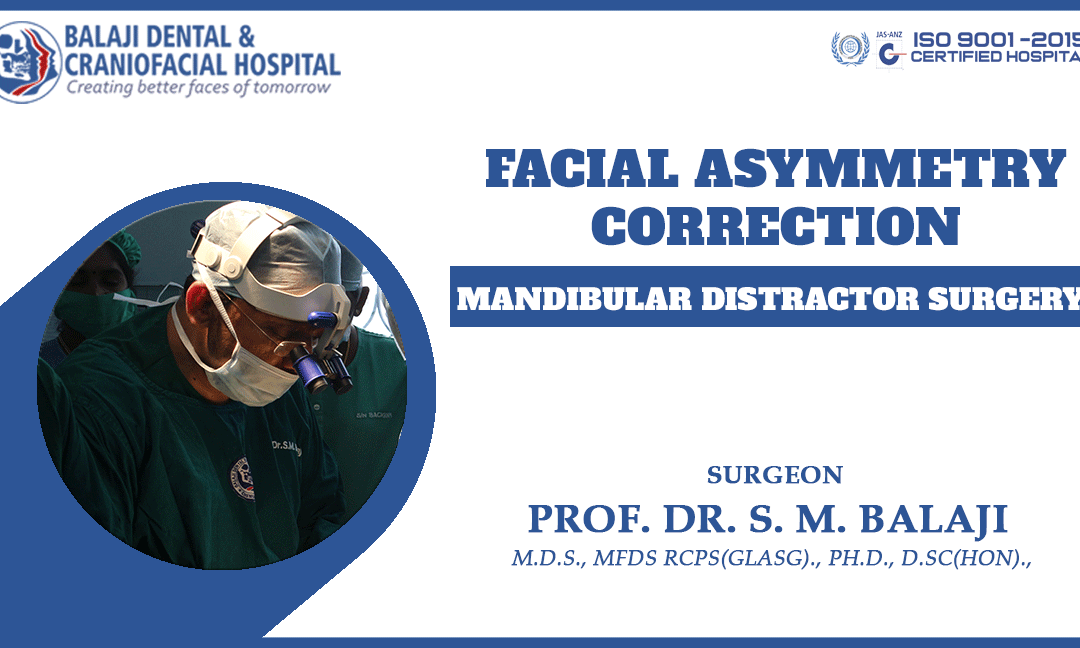 What is Facial Asymmetry?

Facial asymmetry is characterized as a condition where one-half of the face is different from the other half. Minor asymmetries are very normal and can be minor anomalies that distinguish the face, offer uniqueness and make it fascinating. However, large variations in contours are readily identifiable and frequently viewed as influencing the appearance of the aesthetic.

There are many options to treat facial asymmetry, including fat transfer, facial boost operations, soft tissue adjustment, lipodermal grafting, personalized implants, craniofacial architecture correction, or nerve and muscle function alteration. The goal of the procedure is to strengthen the equilibrium between the two facial halves.

The patient is a 23-year-old male from Guntur in Andhra Pradesh, India. He was born with a major asymmetry of the right side of the face. Genetic testing for hemifacial microsomia was performed for the patient with confirmation of the diagnosis.

Incidence of hemifacial microsomia and probable causes for the condition

Hemifacial microsomia is the condition where one side of the face is smaller than the other. It is an autosomal recessive trait. Though most commonly unilateral, it can on rare occasions be bilateral. Facial nerve dysfunction is underdiagnosed because of the magnitude of other deformities.

There might also be involvement of the external ear. It might manifest as congenital absence of ear canal in severe cases. Microtia surgery is required when there is deformity of the pinna of ear.

The patient faces worsening of hemifacial microsomia with growth

The patient’s condition gradually worsened as he grew up. His right cheekbone was also affected. There was complete hypoplasia of the right side of his mandible. The body and ramus were grossly underdeveloped leading to gross facial asymmetry.

He had faced considerable bullying while in school. This had caused him to be quiet and have few friends. His parents had always been worried about how he would adapt to his problems.

Decision made to undergo corrective facial surgery for hemifacial microsomia

The patient informed his parents that he wanted to undergo surgery once he finished his studies. He said that he wanted to begin his work life only after the corrective surgery. His parents began making inquiries regarding hospitals that performed hemifacial microsomia surgery.

Initial consultation at our hospital for hemifacial microsomia correction

Treatment planning explained in detail to the patient and his parents

Imaging studies revealed that the patient had a shortening of the ramus of the mandible. There was also a hypoplastic body and ramus. They were informed that ramus height needed to be increased through internal distraction. A total of 25 mm of distraction needed to be performed to establish symmetry of the ramus on either side.

A maxillary Le Fort I osteotomy also needed to be performed to ensure that his occlusal cant was corrected. This would also help prevent the occurrence of an open bite on the contralateral side. The patient and his parents expressed understanding of the treatment plan and consented to surgery.

Successful completion of the distraction osteogenesis phase of treatment

Under general anesthesia, the patient underwent placement of the right internal ramus distractor followed by the maxillary Le Fort I osteotomy. Following a latency period of one week, distraction of the right ramus was begun. A total of 25 mm of distraction was performed.

There was symmetry established to the patient’s lower third of the face. The mandibular deviation to the right was also corrected. It was explained to the patient that he needed to return in six months for distractor removal. This would allow for complete bony consolidation at the site of distraction.

As per instructions, the patient returns for removal of the internal distractor device. A posterior crevicular incision was made followed by unscrewing of the distractor using an angled screwdriver. The incision was then closed with sutures.

The patient was instructed that he would need bone graft placement to the hypoplastic ramus and body of the mandible. This would result in the completion of his rehabilitation. He expressed understanding of this and said he would return for further surgery in six months.