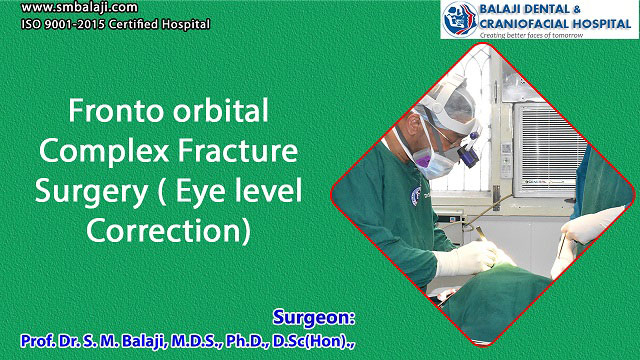 Patient Involved in Road Traffic Accident in his Hometown

The patient is a 46-year-old man from Ajmer in Rajasthan, India. He had been injured in a multi-vehicle road accident around six months ago. There was a direct impact on the left side of his face from a vehicular bonnet.

He had suffered multiple fractures to the bones of the left upper and middle face. Orbital blowout fractures are common in such accidents. There were also serious soft tissue injuries.

Failed Surgery at a Multispecialty Hospital

He had been rushed to a multispecialty hospital in a nearby town for emergent care and treatment. This had been followed by a series of surgeries to correct his deformities. All these surgeries failed and he was left with a gross left-sided facial deformity. There was also malocclusion from the failed surgeries.

Feeling very frustrated, he had approached an organization for help to address this. Having referred patients to us before for facial cosmetic surgery, they sent him to us. They contacted our hospital manager and set up an appointment for him.

Initial Presentation at our Hospital for Redo Facial Trauma Surgery

Dr. SM Balaji, facial reconstruction surgeon, examined him and obtained a detailed history. A 3D CT scan revealed malunion of his facial fractures from botched surgery. There was malpositioning of the medial wall of orbit fracture.

He also had malunion of his frontozygomatic and front orbital fractures. His left frontal bone had a depressed fracture. Extraocular muscle movement was hampered by the circumorbital fractures.

There was also a blowout fracture of the left floor of the orbit. This had resulted in the lowering of his left orbital contents in relation to the right. A poorly positioned mesh was visualized over his left frontal bone. Malunion of his zygomaticomaxillary fracture had resulted in severe malocclusion.

His speech was also affected by his condition. It was explained to him that all the old plates needed to be removed. The malunited fractures had to be refractured and replated in the correct anatomical position. The patient was in agreement with the plan and consented to surgery.

Access was gained to the left forehead fracture site through the old incision. Plates from previous surgeries were removed. There was a very poor reduction of the front orbital and frontozygomatic fractures.

Fracture segments were aligned in normal anatomical positions. The old mesh was also removed. Granulation tissue was excised from the region and bone smoothened with a bur. The old plates from the zygomaticomaxillary fracture fixation were removed.

This was then followed by a subciliary incision. Access was gained to the orbital floor blowout fracture site. Entrapped orbital contents were released. The medial wall of orbit fracture was addressed next. The detached canthal ligament was reattached with a Y-plate canthopexy. This resulted in a good correction of the fracture.

Next, a titanium mesh with Medpor was used to repair the orbital floor fracture. This resulted in eye-level correction for the patient. A new mesh was then placed over the depressed frontal bone fracture.

The surgery resulted in improved facial esthetics as well as functional improvements. The patient tolerated the procedure well. He expressed his gratitude to the surgical team before discharge from the hospital.