History of RTA, Asymmetry of the nose and enophthalmos Correction Surgery

History of RTA, Asymmetry of the nose and enophthalmos Correction Surgery 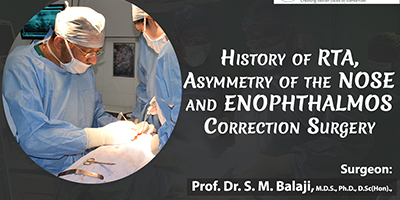 The patient is a young man who presented to our hospital for nasal asymmetry correction. This was from a road traffic accident six months ago. The patient had already been first operated on elsewhere. That surgery had failed. He also complained of having a sunken right eye. This condition has been present for a very long time now.

The treatment plan was explained to the patient

Dr. SM Balaji examined the patient and formulated a treatment plan. This was then explained to the patient in detail who agreed to the surgery.

Under general anesthesia, intranasal incisions were first made to correct the nasal asymmetry. This would ensure the absence of any visible scar formation. Through an intercartilaginous incision, the nasal septum on either side was first exposed. The upper nasal cartilage was then identified, and interdomain ligaments split. Medial and lateral osteotomies were then done on either side. The nasal base asymmetry was thus corrected

Attention was next turned to the enophthalmos correction of the right eye. A transconjunctival incision was first made in the right eye. This allowed for access to the floor of the orbit. A Medpor implant was then shaped to fit into the floor of the orbit. The implant was then screwed in place and stabilized. This resulted in the complete correction of the patient’s enophthalmos. The transconjunctival incision was then left open for spontaneous healing. The patient now had a symmetrical face.

The patient expressed his utmost satisfaction with the results before discharge.