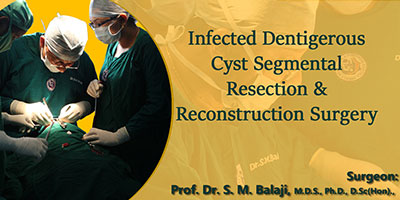 Patient presents with swelling in the anterior mandible

This patient is a middle aged lady from Villupuram. She first noticed a swelling on the left side of her mandible. This had led to a gradual loosening of the anterior mandibular teeth. An increase in the size of the swelling alarmed her and she went to a dentist. He obtained an x-ray, which revealed a cyst. Suspecting a simple cyst, the dentist had removed the cyst, which had an impacted tooth within it. The swelling however returned and became infected. He then referred her to our hospital for further management.

Dr SM Balaji examined the patient and ordered diagnostic studies and a biopsy. Biopsy revealed the presence of an infected dentigerous cyst. The patient agreed to surgery after the treatment plan was presented to her.

Under general anesthesia, two rib grafts were first obtained from the patient. A Valsalva maneuver demonstrated absence of perforation into the thoracic cavity. The incision was then closed in layers with sutures.

A mucogingivoperiosteal flap was first raised and the region overlying the cyst exposed. The cyst was then enucleated in toto along with the extraction of teeth overlying the cyst. The rib graft was then shaped into pieces to fit into the bony defect. These pieces were then fixed with screws and the flap sutured. The patient recovered from general anesthesia without any complications.