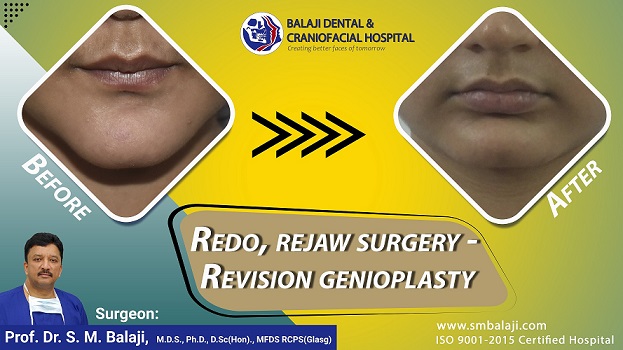 The chin is a very important part of the face. It gives a definition to the lower half of the facial structure. Sex determines the structures of the chin. Males have prominent chins while females have a more delicate chin.

A weak chin in males leads to a feminine appearance. The opposite holds true for the opposite sex. A prominent chin can lead to a masculine appearance in females. Everyone gives a lot of importance to the shape and form of their chin. The chin also plays an integral role in facelift surgery.

Chin implants are used to often augment the chin for patients with weak chins. This can either be through autografts or through customized allografts. Autografts offer very good results as they are harvested from the patient.

India has become a preferred destination for medical tourism regarding facial plastic surgery. The facilities available here are on par with the best in the world. The cost of facial cosmetic surgery in India is also just a fraction of what it is in developed Western nations. The good results allied with the cost of facial plastic surgery in India, automatically make it an ideal destination.

Selecting the Ideal Hospital for Cosmetic Chin Surgery in India

Our hospital is amongst the best centers for cosmetic chin surgery in India. We offer world-class service allied with the affordable cost of facial cosmetic surgery in India. Eyelid surgery is also a specialty surgery performed in our hospital. Surgery follows minimally invasive protocol with small incisions.

We are located in Chennai, which is the capital city of Tamil Nadu, India. Chennai is considered to be the healthcare capital of India. Healthcare in Chennai is comparable to international destinations in Western nations. We have state of art hospitals, which offer cutting-edge technology.

Results for chin augmentation surgery and chin reduction surgery are amongst the best in the world. Glowing testimonials provided by our patients attest to the highest standards followed at our hospital.

Facial Cosmetic Surgeon in India with Experience and Expertise

Surgery procedures performed in our hospital follow the strictest of international protocols. We pay utmost importance to patient safety.

The patient is a young female from Ludhiana in Punjab, India. She had a very feminine and delicate chin, which enhanced the overall appearance of her face. However, she had always desired a more prominent chin, feeling that it would enhance her facial esthetics. Having discussed this with her parents, she presented at a local hospital in her hometown.

Dissatisfaction with the Results of her Chin Augmentation Surgery

She had undergone chin augmentation surgery, which had resulted in a less than ideal facial appearance. It had altered her entire facial appearance along with distorting the appearance of her lower lip. She had soon started feeling depressed because of this. Her worried parents took her to a renowned facial plastic surgery hospital in a nearby city.

She stated that she desired to regain her previous facial features and wanted a reversal of the chin augmentation surgery. The doctor at the hospital realized that this needed to be performed by a surgeon experienced in facial cosmetic surgery. They had then been referred to our hospital for management of her condition.

Initial Presentation at our Hospital for Reversal of her Chin Surgery

Dr SM Balaji, facial plastic surgeon, examined her and obtained detailed imaging studies. This revealed plates in her upper and lower jaws from an old surgery. It also revealed the chin augmentation, which was held in place with plates. The revision genioplasty was explained to her and she consented to surgery.

The plates from her upper and lower jaws from the old surgery were first removed. Attention was next turned to the revision genioplasty. The plates holding her augmented chin were removed. Granulation tissue from the surgical site was debrided and the chin was repositioned in its previous position.

New plates and screws were then utilized to stabilize the chin in its original position. All incisions were then closed with sutures. She regained her presurgical facial appearance from before the failed augmentation surgery.

Total Patient Satisfaction from the Reversal of her Chin Augmentation Surgery

The patient and her parents were extremely happy with the results of the surgery. She was extremely thankful to the surgical team for having restored her facial esthetics. They expressed their complete satisfaction with the level of care at our hospital before discharge.