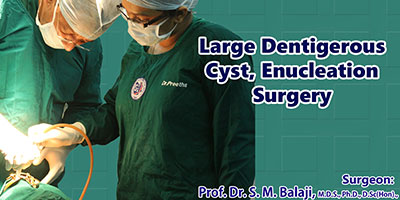 This little boy from Bangladesh developed a swelling in the front region of the upper jaw. The swelling kept increasing in size. His worried parents brought him to India for treatment. They enquired about the best hospital to get their son treated. It was during this time that they met a dental surgeon in Kolkata. He recommended Balaji Dental and Craniofacial Hospital, Teynampet, Chennai to them. They made enquiries and presented at the hospital with their son. Dr SM Balaji, Cranio-Maxillofacial Surgeon, examined the patient and ordered comprehensive imaging studies. A 3D axial CT scan revealed a dentigerous cyst in the anterior maxillary region. He explained the condition to the boy’s parents and advised surgical excision of the cyst. The parents consented to the plan of action and the patient was then scheduled for surgery.

Surgical enucleation of the cyst by Prof SM Balaji