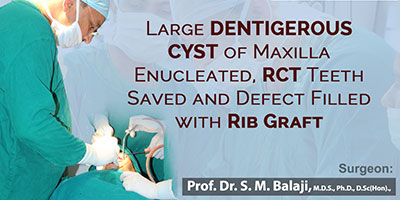 The patient is a young boy who presented with a swelling in the left anterior maxilla. Dr SM Balaji examined the patient. The teeth in the area of the swelling were nonvital. Radiograph revealed the presence of a large dentigerous cyst in that region. Treatment planning was for surgical excision of the cyst.

A mucogingivoperiosteal flap was first raised in the anterior maxillary region. There was a supernumerary tooth present within the dentigerous cyst. The dentigerous cyst was then enucleated and removed with care taken to save all RCT teeth. A rib graft was then harvested to fill in the bony defect. Valsalva maneuver demonstrated lack of perforation into the thoracic cavity.

The harvested rib graft was then cut and shaped to fit into the bony defect. The graft was then fixed with screws. The flap was then sutured back in place. Postoperative healing was uneventful.