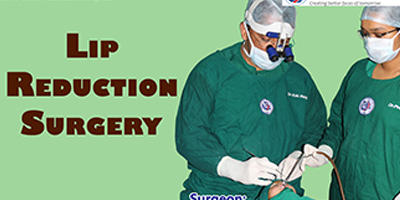 The patient presented at Balaji Dental and Craniofacial Hospital, Teynampet, Chennai, with the complaint of an excessively large lower lip. She said that she wanted it to be reduced to be proportionate to the upper lip. Dr. S. M. Balaji, Maxillo-Craniofacial Surgeon, examined the patient and explained the surgical correction procedure in detail. The patient consented and was scheduled for surgery.

Under general anesthesia, the portion of the lip that was to be excised was marked out carefully. Incision was then made along the markings and extended down into the submucosal region. Dissection was carried down into the deeper tissues and excess tissue was excised from the region. Once adequate removal of excess tissue was performed, the vermillion borders of the incision were approximated with sutures. At the two week postoperative visit to the hospital, the patient expressed her satisfaction at the results of the surgery.