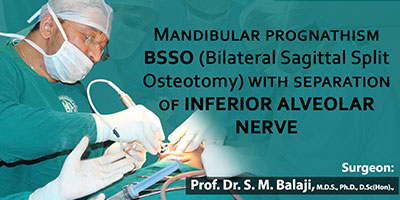 This young man always had a very prominent mandible. He had always hated it and wanted it corrected. This had also been a source of difficulty with eating due to malocclusion. He decided to get this treated and turned to the Internet. He researched the Internet for the best jaw correction surgeon. His search led him directly to our hospital.

Dr SM Balaji examined the patient and ordered diagnostic studies. He explained his treatment plan to the patient. The surgical plan was to perform an Obwegeser’s bilateral sagittal split osteotomy. This would set back the lower jaw.

Complete correction achieved with surgery with no scarring

Under general anesthesia, incisions were first placed in the retromolar area. The bone in this area was then exposed. Osteotomy cuts were next placed taking care to protect the inferior alveolar nerve. The position of the teeth and the amount of setback required was also kept in mind. Bilateral sagittal split osteotomy was then performed.

Excess bone was then removed and correct occlusion achieved. The bony segments were then stabilized using titanium plates. Incisions were then closed with sutures. This procedure was done on both sides. The entire procedure was intraoral with no residual scarring.

The patient expressed his satisfaction at the results of the surgery before discharge.