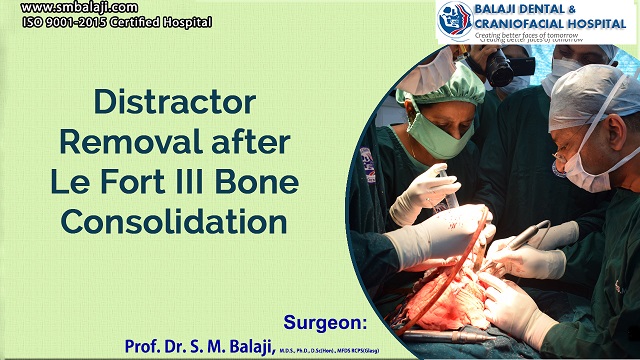 What is Maxillary distraction osteogenesis?

Maxillary distraction osteogenesis is a surgical technique that prolongs the lower jaw and forces the tongue forward to widen the airway and corrects these problems. Traditionally, babies with this disorder have been treated by tracheostomy, which continues for many years before the infant develops the condition.

Patient born with the classical presentation of Crouzon syndrome deformities

The patient is a 24-year-old female from Manapparai in Tamil Nadu, India. She was born with the abnormal facial features of Crouzon syndrome. Genetic testing is done soon after birth confirmed the diagnosis.

Crouzon syndrome is caused by a genetic defect that leads to craniostenosis. There is the premature fusion of skull bones in this condition. This leads to the development of deformities of the face and skull.

Manifestation of Crouzon syndrome with bony orbital and midfacial deformities

This patient had most of the classical signs of Crouzon syndrome. She had protuberant eyeballs because of deficiency of the orbital bones. There was also a marked regression of the midfacial region. Strabismus was another classical sign that was seen in this patient along with a beaked nose.

She had faced a significant degree of bullying at school. Her parents had therefore decided to homeschool her for a majority of her school years. This limited social contact had resulted in her having very few friends. She had always been socially withdrawn and introverted.

Her parents were counseled by a plastic surgeon that she needed surgical correction of her deformities. They had made extensive enquiries regarding the best hospital to address her needs. A social organization that helps patients with facial deformities had referred them to us.

Many patients with congenital facial defects arising from syndromic craniostenosis have been successfully treated in our hospital. Distraction surgery is routinely performed here. Facial bones are brought into perfect alignment through craniofacial surgery.

Initial presentation for of syndromic facial deformity surgery in our hospital

Dr. SM Balaji, syndromic craniofacial deformity surgeon, examined the patient. Imaging studies including 3D CT scans were ordered for the patient. He also obtained a 3D stereolithographic model of the patient’s skull. She had all the classical signs including protruding eyeballs, a beaked nose and midfacial retrusion.

He explained that the patient needed midfacial Le Fort III advancement surgery along with internal distraction. A Kawamoto distractor device would be utilized for this. This was due to the extreme degree of midfacial retrusion. The patient subsequently underwent surgical correction of her deformities.

A bicoronal flap was raised followed by bony cuts to the zygoma. The lower part of the orbital bone was then cut for 180 degrees next. This allowed for dysfunction of the bone. Kawamoto distractors were then fixed and checked with trial distraction.

Her frontal prominence was also reduced through the use of a burr. The bicoronal flaps were closed. Maxillary Distraction osteogenesis commenced after the latency period. A total of 15 mm of distraction was performed. There was a complete correction of her midfacial retrusion along with strabismus. This would normalize her eyesight.

They were ecstatic with the results of the surgery. She could see things clearly now and there was a marked improvement in facial esthetics. Her parents were instructed to bring her back in four months for internal distractor removal surgery. This period would allow for bony consolidation at the site of distraction.

Patient returns for removal of internal distractors after four months

Her skin staples were removed following the complete healing of the incision wound. They were instructed to return in four month’s time for a checkup. She and her parents expressed their complete satisfaction with the results. They thanked the surgical team before discharge from the hospital.